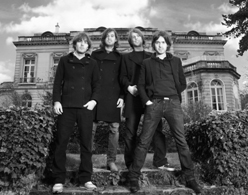 Hey, everybody, it’s Andy Gesner and the exuberant staff at HIP Video Promo with another video completely worthy of your attention. Here at HIP, it’s always a thrill for us to work with a band we’ve always admired. But when that band we’ve always admired asks us to help spread the word about a new album that is clearly their best work yet – and about a video that surpasses everything else they’ve ever shot – that’s tremendously exciting. Just about everybody who has heard the new Phoenix album agrees: the French quartet’s distinctive amalgam of indie rock, new wave, club music, AM standards, and off-the-wall international pop has never sounded fresher, catchier or more engaging. We can’t stop listening to our copy of It’s Never Been Like That, and we know we’re not alone.

For those of us who’ve followed the Phoenix story from its beginnings,It’s Never Been Like That feels like a summation of everything that makes the band so great. If 2000’s United announced Phoenix as a band smart enough to marry electronic-pop beats and infectiousness to soft-rock beauty, and sophomore release Alphabetical stretched the band’s adventurous tendencies even further, the latest album cranks up the wattage and presents the quartet as classic songwriters and performers with a firm understanding of rock basics. It’s not that the group uses guitars more, necessarily, because Laurent Brancowitz and Christian Mazzalai have always been electrifying six-string players and twin sonic focuses. It’s that the guitars sound more organic; tighter, brighter, Kinks-forceful and Smiths-deft.

Credit Tony Hoffer (Belle & Sebastian, Beck, Granddaddy), whose energetic production helps bring a new urgency to Phoenix’s writing, and singer Thomas Mars, who has never sounded so brash and commanding. In a four-star review, the All Music Guide acknowledges the band’s woodshedding, and praises its newfound confidence; Pitchfork goes AMG one better, giving It’s Never Been Like That an 8.0 and lauds its “showstopper tracks”. Best yet, Stylus claims (correctly) that the new album puts to shame its stateside counterparts in the indiepop sweepstakes: “With It’s Never Been Like That, Phoenix have shown us once again that much of the best ‘American’ radio-friendly pop music is being made in places where the Euro, soccer, and litre rule over the dollar, football, and gallon.” This autumn, Phoenix will have an opportunity to show Americans in person: they’re embarking on a long U.S. tour called “Sometimes In The Fall” that will take them from coast to coast.

As you might expect from a band from Versailles, Phoenix have a strong appreciation of architecture and landscape. Daniel Askill’s clip for “Consolation Prizes” shoots the band in front of monumental, beautiful Parisian scenery: palaces, gardens, office parks, concrete obelisks. But this isn’t a naturalist’s clip: the backgrounds shift rapidly, flashing from slide to slide on the downbeat. The band stays, roughly, in the same spot, but the scenery jumps behind them. Askill, who is known for his experimental film We Have Decided Not To Die, is highly sensitive to color, and he bathes the band (and his backdrops) in the splendor of the city of light. The camera moves choppily, skipping frames, sliding in on the performers and just as suddenly backing off. It’s a surreal travelogue, a riffle through a drawer of snapshots and postcards, and a perfect setting for an alt-electronic group that is almost – but not quite – traditional.

We know that we can count on Krista Crews and the savvy music lovers at Astralwerks, the same who have brought us Fatboy Slim, Radio 4 and Placebo this year, to continuously deliver the best videos. Phoenix will be on the road in the US for much of the fall, and we have enough copies of It’s Never Been Like That to go around. So if you want a video interview or a copy of the CD for an on-air giveaway, we are your source for all things Phoenix. If you need more info, call Andy Gesner at 732-613-1779 or e-mail us at info@HIPVideoPromo.com. You can also visit www.AstralWerks.com or www.wearephoenix.com to find out more about Phoenix.