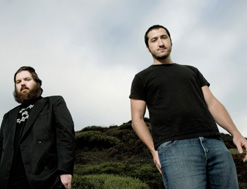 Hello fellow rock jocks! It’s Andy Gesner and the tireless staff from HIP Video Promo bringing a new video we have been awaiting with bated breath! As we’ve come to expect from the first Tuesday after the end-of-summer holidays, the 11th of September was a red-letter day on the album release schedule. The sales battle between Kanye West and 50 Cent absorbed much of the hype, but well-regarded bands like Go! Team, Hot Hot Heat, Shout Out Louds, and many others also vied for the favor of record buyers. But although bigger blockbusters dropped on the 11th, we feel comfortable saying that no album was more fiercely anticipated by a band’s fanbase than was Autumn Of The Seraphs. Those who follow Pinback are like that. They feel that the San Diego combo makes music unlike anybody else’s – music that speaks directly to them.

A back catalog like Pinback’s does tend to raise expectations.Summer In Abaddon, the band’s harrowing 2004 release, was one of the best-loved and most respected albums of 2004. Critics raved about it too, praising the intensity of the performances and the quality of the compositions; “Pinback’s darkest hours”, explained Stephen Deusner of Pitchfork, “have inspired their finest moment”. A B-sides collection released last year was no stopgap: Nautical Antiques contained some of the group’s most startling and revelatory work. Now comes Autumn Of The Seraphs, and it’s already burning its way into the collective consciousness of the rock underground. “It’s a fully realized and reflective album”, crows Gwendolyn Elliott ofPrefix, “polished with unassuming wisdom”.

“From Nothing To Nowhere”, the lead cut from, features everything that makes Pinback singular: provocative lyrics, rich atmospherics, intricate and characteristic bass playing by Zach Smith, and a semi-sweet, semi-tough vocal from charismatic frontman Rob Crow. Like much of the album, it’s an unprecedented fusion of contemporary indie, prog, math-rock,Synchronicity-era Police, and digital folk. Mario Rubacalba of Rocket From The Crypt keeps the beat behind the kit, and Smith and Crow fill out the sound with polytonal bass guitar and hypnotic six-string.

Joshua Nichols’s clip for “From Nothing To Nowhere” is similarly stark: it features the members of Pinback in action, playing under a dark sky in what initially appears to be a barren field. But there’s more detail here than what immediately meets the eye – three wheel-treads slash across the cold earth in front of the musicians. Bright light pours over the drummer’s shoulder; later, electrical supernovas illuminate the desert landscape. The camera pulls back, and a spectacular aurora borealis hangs in the sky above Pinback, throwing an eerie light on Rob Crow’s face. Could they possibly be performing on the moon, or another world? Certainly there is something extraterrestrial and untethered about this scene – something that invites the viewer to experience an altered state. Flecks of dust catch the light and float through the air, shadows slash across the ground, and the band members stand and play; titans of this deserted world.

As always we are excited to be working in tandem with Sara Tolbert and the Touch & Go crew to bring you this most excellent video. Pinback is going to be on a nationwide tour through the end of October, so let us know if you’re interested in meeting up for a video interview and video IDs when they come to your area. Or if you’d like a couple copies of Autumn Of The Seraphs for on air giveaways, let us know and we’ll set you up. We’re all about Pinback here at HIP, and have been ever since promoting their “Fortress” video two years ago. If you need more info call Andy Gesner at 732-613-1779, or email info@HIPVideoPromo.com. You can also visit www.TGRec.com or www.Pinback.com to find out more about Pinback.

For info on the previous Pinback video “Fortress ” click HERE