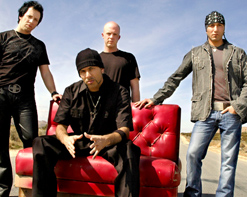 Hello music video loving comrades! It’s Andy Gesner and the staff from HIP Video Promo and it’s time to kick it up a notch with a hard rocking masterpiece! One of the things that consistently amazes and inspires us here at HIP is how expressive the music video medium is: clips may be four minutes at most, but they can be extraordinary vehicles for detailed storytelling. In the hands of a skilled director, a music video can communicate great emotional depth. “Somebody Like You” by Pop Evil isn’t an ordinary modern rock song – it’s an unflinchingly honest account of loss and heartbreak, set to a pounding backbeat. Pop Evil needed a clip that made as much resonance as the song it was meant to accompany, and Jason Honeycutt’s evocative video fits the bill perfectly.

In fact, this story-clip is so well-paced and so beautifully shot that the great cast is (almost) immaterial. The “Somebody Like You” clip is a love story with a tragic ending, and the faces we follow will be familiar to most TV watchers. The gorgeous Britt Koth of MTV’s 8th & Oceanplays the heroine, and she’s every bit as radiant here as she was on the popular fashion-model reality show. Rossi Morreale is her love interest, and the same earnest charm he exudes while hosting his shows on the Style and Speed Networks is more than apparent in this video.

The band looks great, too. Frontman Leigh Kakaty is a gigantic presence on the mic and on camera, spinning out his story with the authority of lived experience. Since he’s so committed to the success of his band, it’s easy to forget that Kakaty has a second career as an indie rapper – and as “The Harem King”, he’s opened shows for 50 Cent and Snoop Dogg. While the presence of Kid Rock producer Al Sutton behind the boards might suggest an integration of rap elements into their heavy music, Ready Or Not is straightforward modern rock EP, indebted to Soundgarden and Rage Against The Machine. But Kakaty’s experience as an emcee does lend certain indispensable qualities to his singing: controlled aggression, precision of language, rhythmic dexterity.

Pop Evil intends to finish a full-length, and the Grand Rapids quartet will soon be returning to the studio with Sutton to cut more tracks. But opportunities keep getting in the way: the band inked an endorsement deal with Dodge, and they’ve been playing at the openings of Guitar Center stores all over the Midwest. Regional popularity keeps Pop Evil on the road, and they continue to be offered gigs that they can’t turn down: they’ve shared bills with Boston, Shinedown, Puddle Of Mudd, Trapt, and even Fat Joe. Moreover, the group has embraced video-making; Kakaty sees it as a natural extension of his storytelling, and a means by which he can further articulate his ideas.

That means you can count on it that “Somebody Like You” is only the first great clip you see from Pop Evil. There’ll be more to come, and if this one is any indication, they’ll be building a videography to be reckoned with. The “Somebody” video takes place at a roadside diner, and on the highways that surround it; we watch Morreale’s character beam at Koth’s, and we see him open a jewel box and expose a diamond ring to the camera. Nervous, set to propose to her, he leads her to their car. But a crash on the highway interrupts their plans – and the rest of the clip is a ghost story. Looks are deceiving, though, and Honeycutt and Pop Evil have a narrative twist in store, and one with much to say about the nature of bereavement and denial.

We’ve recently had the pleasure of being introduced to all of the fine folks at Jar’d Star and we already see big things for them in the future. You can catch Pop Evil in a town near you and we would be happy to help set up video interviews. We’ve also got plenty of copies of Ready Or Not on hand for all of your on-air giveaway needs. If you need more info call Andy Gesner at 732-613-1779, or email info@HIPVideoPromo.com . You can also visit www.PopEvil.com to find out more about Pop Evil.