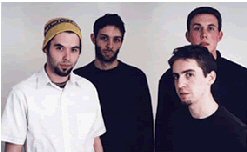 Hi, everybody! It’s Andy Gesner and the staff from Hip Video Promo. Every local scene has its heroes: bands ready to take that next step toward national exposure. Today I’m thrilled to be able to share with you the debut video from Pthalo, a Connecticut four-piece that perfectly fits the description of a band too talented and energetic to be contained by its regional identity any longer.

It was frustration with the limited aspirations of the New Haven rock scene that brought these musicians together, and it’s that same frustration that has pushed them to develop a world-class sound and approach. The members of Pthalo are young and photogenic enough to be video stars, to be sure, but they’re also veterans of countless stage shows and musical projects. Drummer Michael Conlin and multitalented guitarist/synthesist Chris Scheidel (also the director of the “Chasm” video) have collaborated with Page Hamilton of Helmet, a group that Pthalo sometimes resembles. Lead guitar player Nic Demet is also well-known in Connecticut for his alternately furious and textural six-string approach.

But the group’s most recognizable asset is bassist and frontman Nolan Voss. Voss hammers away at the low strings of his instrument with a focused, manic intensity that borders on fixation. His square, metallic, and menacing sound provides a solid foundation for Pthalo’s musical explorations. Possessor of a singing voice at once urgent and subtle, his presence dominates the group’s sound – his growl makes an immediate emotional connection, and hangs on tenaciously.

Pthalo, the band’s debut, is searing, driven – a roller-coaster of dynamic changes, pounding hard rock, engaging synthesizer textures, and scalding performances by Voss. Lead single “Chasm” communicates the fury of modern radio rock, but it also evokes the tougher side of new wave favorites such as the Cure, Echo & The Bunnymen, and The Chameleons. Beginning with evocative bass guitar pattern and howls of desperation, the song mounts to a thunderous climax.

The song is tight, intriguing, and bleak, and its accompanying clip reflects those qualities. The band is seen only partially: bathed in blue light, they’re shown playing in television monitors. These screens cut their faces into fractions – we see them approach the lens, but the cameraman is restless. Voss enters the screen and his face fills it for a second or two, and then just as quickly as it appears, it’s yanked away. Pthalo stays distant, partially obscured; their fury contained within an electronic frame. They don’t pose for either camera – they’re captured in action, slamming away at their instruments and microphones like stir-crazy mental patients bouncing off the walls of their rubber room.

But there’s another character in the video – a teenage girl who wanders through a poorly-lit warehouse. She’s alone, and she feels somehow jeopardized, but she moves with purpose. The girl finds her way to the television sets broadcasting Pthalo, and, seeing the band, she’s transfixed before the monitors. As the song builds in intensity, her trance becomes an active animation: moved by the music, she runs through the warehouse, knocks over boxes, dances in abandon. By the end of the video, she, too has been caught within a television screen, and she stares out impassively at the viewer. Has her enthusiasm transformed her, brought her closer to the band, or has it somehow been her undoing?

If you need more Pthalo info or extra copies of their new CD for on air giveaways, call Andy Gesner at 732-613-1779, or emailinfo@HIPVideoPromo.com .