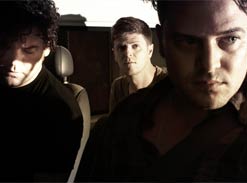 Greetings, programmers! It’s Andy Gesner and the rest of the HIP Video Promo staff, presenting you with another great video from the folks over at Warp Records. These last couple of months, you’ve seen awesome clips from fellow Warp artists Born Ruffians, Jamie Lidell and, most recently, The Hundred In The Hands. This new video by PVT (formerly known as Pivot until a legal issue forced the band to change their name) is another that surely won’t disappoint.

We’re positive that PVT’s video for “Window” is unlike anything you’ve ever seen before. It’s shot in the most creative way, using unique camera techniques that give the perspective that the viewer is one of the members of PVT. From the practice space to the live performance, the camera is never still, shaking with the rhythm of the song as you look over all aspects of PVT’s production – drums, keyboards, laptops and mixboards all included. Timing is everything, especially when the bridge kicks in and the scene changes to the live performance, overlooking a packed audience. You get a real sense of what it’s like looking from the other side, and it’s definitely a full body music video experience.

These Australian electronic/experimental rockers are definitely bringing it all they’ve got. What initially started as an improvisational five-piece band back in 1999 by brothers Richard Pike and Laurence Pike has evolved a decade later into a refined trio pushing the boundaries of their genre. When electronica artist Dave Miller joined the brothers in 2005, they were set, later touring with the likes of music giants Arctic Monkeys and Sigur Ros.

The “Window” video first premiered on Pitchfork.com, who immediately honed in on the fact that, “It’s all about the genesis of a song in this clip.” The intention for the video is certainly met and exceeded beyond expectations, and it’s a great taste of what’s to come from the band’s forthcoming album Church With No Magic, set to drop in August.

Thanks to the crew over at Warp Records for bringing HIP another incomparable clip with PVT’s “Window.” If you would like copies of Church With No Magic please feel free to hit us up! If you need more info, call Andy Gesner at 732-613-1779 or email us at info@HIPVideoPromo.com.