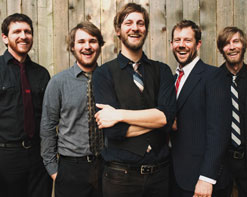 Despite what their name suggests, Quiet Company is here to sound off above the subtle decibel levels! It’s Andy Genser and the HIP staff here to bring you a powerhouse indie rock tune to keep you clapping along through the winter and spring. “You, Me & the Boatman” has already taken off in the internet world, building a massive following through word-of-mouth discovery. Now it’s your turn to see what all the noise is about!

Mixing hard-hitting piano laced rock of bands like Death Cab For Cutie and Spoon with roaring bass, guitars and trombone, Quiet Company have achieved their own balance of rawness and pop. Led by former Eisley contributor Taylor Muse, the Austin, Texas quintet have played several hundred shows across the United States to date. However, the band’s biggest movement has been taking place in cyberspace this year. “You, Me & the Boatman” has been instantly embraced by the indie rock community, attracting over 38,000 likes on Facebook alone! The band also has similarly impressive numbers on their YouTube video. Quiet Company has made a big splash in the festival circuit this year, with appearances at De Luna Festival & CMJ. Since the release of the album, “You, Me & the Boatman” has already peaked at #9 Most Hyped Track on Hype Machine and #5 on We Are Hunted’s Rock Charts.

The band has grown tremendously in the past few months with over 80,000 daily listens on Grooveshark, putting one of their singles at #7 on the Most Listened chart. Obviously, you can’t make waves this big without the press taking note – Paste.com, What the Ruckus, Earmilk, We All Want Someone to Shout For,Indie Music Filter, Salad Days Music, AbsolutPunk, Consequence of Sound, Mashable, Alternative Press,Spinner.com, MTV Hive, and NME have all covered Quiet Company.

“You, Me & the Boatman” is the leading single from the band’s fourth album We Are All Where We Belong. The record deals with moral values and personal conflicts, making it their most relatable effort to date. Get ready to crank up the fuzz, as the song features beautifully sharp distorted bass lines to get your hips moving along to the chipper drum beat. What really seals the deal on this indie-rock bouncer is the massive chorus with soaring horn section! The video is entirely based on a unique projection of the video on milk which starts as what appears to be an interesting filter, and gradually becomes more agitated with waves and splashes as the band performs the song.

We are thrilled to be sending you off to take on 2012 with a band that is already stirring up every bit of the right attention. We are sure that Quiet Company will be one of the breakout bands of 2012 and we’d like you to be part of it. Place your requests for copies of We Are All Where We Belong, and we will be sure to hook you up. For more info call Andy Gesner at 732-613-1779, or email info@HIPVideoPromo.com. You can also visitwww.QuietCompanyMusic.com for more info on Quiet Company.