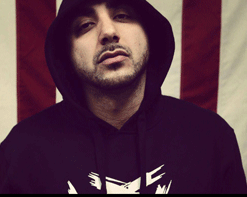 Los Angeles-born, overtly-Armenian rapper R-Mean is bringing word of his mountainous ancestral republic to one of our biggest cultural expressions of all : hip-hop. In early 2014 R-Mean is dropping his most ambitious album to date, 7 Deadly Sins, on Pentagon Records; and the first single, a hometown anthem, “Lost Angels” features non-other than multi-platinum artist The Game. A sleek, raw black and white video, Directed by Alex Kodo, helps take us inside R-Mean’s version of Los Angeles, from Downtown to Little Armenia and back. Transcending traditional contemporary hip-hop, this clip is filled with innovative scenes that portray everyday living in Los Angeles. With a stylish hook and chorus that is sure to keep you on your feet, “Lost Angels” is an anthem for the next generation of hip-hop go-getters. HIP Video Promo is pleased to exclusively introduce the well-crafted music video to the world.

R-Mean’s lyrical prowess and melodious flow has amounted to national recognition, famous friends and critical acclaim. He has been featured as the opening act for Nas, as well as Bone Thugs N’ Harmony. His numerous appearances include MTV’s “Rapfix” with Mobb Deep, freestyling on the legendary (the world famous)“Wake Up Show” on Power 106 and Shade 45, Los Angeles, and numerous appearances on “Sway in the Morning” on Shade45.

As the first rapper of Armenian descent to achieve his level of international and national acclaim, R-Mean is heading towards the ranks of his fellow Armenian icons System Of A Down and Kim Kardashian. His multi-cultural background and extensive fan base has afforded him multiple opportunities to perform around the world including Canada, Europe, and all over the United States. Through his diverse upbringing, always staying true to real Hip-Hop, R-Mean breaks international barriers through his music like no other artist. With a flow reminiscent of Nas and Eminem, and his life experience sets him far apart from other artists in his genre.

For more information on R-Mean, please contact Andy Gesner and the HIP Video Promo staff at (732)-613-1779 or email us at info@HIPVideoPromo.com. You can also visit www.R-Mean.com for more info.