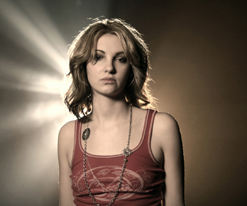 Greetings from Asbury Park! It’s Andy Gesner and the staff from HIP Video Promo back again to support a soon-to-be Garden State musical hero! It’s no longer a secret: Asbury Park is hopping again. Its arts-driven resurrection has attracted hundreds of young musicians and painters to the Jersey Shore. In the past year or two, a genuine indie community has emerged in Asbury, and it’s been an inspiration to everybody here at HIP – we’ve gotten to watch as old clubs have been refurbished and new ones have been established, institutions have been revitalized, and buildings have been retrofitted for studio use. The Asbury rock scene is once again the toast of the Garden State, and it’s inevitable that some of the creative ferment there will break through to the mainstream. Asbury Park is poised to throw a hero on the pop charts. We’re not sure exactly who that’s going to be, but smart money is on Rachel Zamsteen.

Why? Because Zamsteen has it all. She’s a singer with a voice both tough and acrobatic, a musical polymath with roots in jazz and folk as well as modern rock, a writer with a gift for evocative phrases and the courage to be emotionally honest, and a dynamic performer with pin-up looks. Best of all, she’s only 22 years old. Ten years ago, a talent like Zamsteen would never have been attracted to the Asbury area; now, she may as well be the face of the city’s revival. Like the town she’s from, her music has deep roots in 20th Century American entertainment history, and uses those underpinnings as a springboard for exciting explorations, excavations, and unexpected reconstructions.

Bouquet, Zamsteen’s sensational debut, is an easy album to describe but a damn near-impossible one to categorize. The young singer draws inspiration from Billie Holiday, and prewar jazz, but when she and her band plug in and turn up the amplifiers, the result is pure, slamming pop-rock. Comparisons to Fiona Apple and Regina Spektor are useful signposts (and she’s gotten plenty of both), but neither of those singers rock as hard as she does, or pull so effortlessly from disparate sources. “This Gun”, the lead single from Bouquet, is a prime example of what she can do with a pop song: one moment, it sounds like a stripped-down version of some lost big band standard; the next, she and her combo are roaring away like Tom Waits’s band at its booziest and most dangerous-sounding.

Zamsteen and notpop records are true independents, and have built support from an enthusiastic community base. It’s a great way to go if you’ve got the talent to carry it off, and Zamsteen clearly does: her MySpace page has been off the hook for the better part of 2006, and she’s beginning to get recognition far from the Jersey Shore. This October, she’ll be embarking on an international tour that’ll take her as far as Stockholm. But on the 11th of November, Zamsteen will return to Monmouth County for a performance at the Asbury Music Awards. She’s been nominated as best new artist and best female vocalist, and we’re confident she’d have been tapped for more honors if Bouquet had been released earlier in the year.

The young singer stays true to her scene in the clip for “This Gun”. Directed by local filmmakers Jack Roberts and Pete Konczal, the video finds Zamsteen rocking the legendary Asbury Park Convention Center. On that huge stage, fronting her band, she looks commanding and natural, her every gesture perfectly calibrated. But she’s even more hypnotic in her dressing room by herself, or backstage with her Rhodes electric piano, hammering out the chords to “This Gun”, and singing with the kind of commitment and passion that can’t be faked. Star-quality is an elusive commodity for sure, but any passing observer of popular music could tell you: Rachel Zamsteen’s got it.

We are truly thrilled to be working with Andy Feldman, Jack Roberts, and everyone in the notpop records camp to bring your attention such a deserving young artist and her phenomenal video. In fact, we’re so thrilled about Rachel that we’ve invited her to perform at our HIP Video Promo 6 Year Anniversary Party on November 3rd at Maxwell’s, located in beautiful Hoboken, NJ! We also have plenty o’ copies of Bouquet on hand for all of your on-air giveaway needs, so don’t hesitate to be in touch. If you need more info call Andy Gesner at 732-613-1779, or email info@HIPVideoPromo.com .