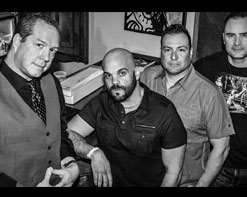 One listen to their self-titled EP and it’s immediately apparent that Raftree is determined to position themselves as New Jersey’s premier alternative-rock metal band. The fierce quartet, fronted by Kenneth Raftree, is keenly aware that the hard rock world is littered with bands that sacrifice strong songwriting in favor of volume and distortion.

Perhaps it’s due to his early days starting out playing covers of legends Led Zeppelin and Black Sabbath, but crafting a bruising rock song that also emphasizes expressive melodies and vocals alongside rhythmic melodies and raucous guitar riffs is something that Kenneth has embraced from the moment he started writing his own tunes. The solidified lineup of Charly Alaimo (lead guitar), Andy Roland (drums), and Ed Tuberion (bass) sets fire to the hive of conventional hard rock, with the new single for “All The Time” as their finest example of Raftree’s fierce skill set.

For the “All The Time” video, Raftree unleashes a hard-hitting performance clip of brutal efficiency. The group sets up in the empty basement of an abandoned home to rock out a blistering performance. The aged room with its stone walls, exposed brick, ceiling beams and old heavy machinery is the perfectly stylish utilitarian backdrop for Raftree.

Against this minimalist scenery the band cranks their half stacks, testing the structural integrity of the building in the process with the booming bass, crushing guitars, and thunderous percussion. Director Jeffrey Moore uses a sprinkling of other footage like falling hourglasses and vague scenes of tarnished relationships in happier times. Ultimately, though, this video is all about showcasing the chops and unbridled energy that defines Raftree.

It’s a pleasure and an honor to have the opportunity to work with our fellow Jersey musical kindred spirits! We hope that all of you rockers out there in music video world will support this group wholeheartedly and we’re here to help make that happen. Please contact Andy Gesner and the HIP Video Promo team at (732)-613-1779, email us at info@HIPVideoPromo.com. You can also visit www.RaftreeBand.com or www.Facebook.com/RaftreeBand for more info on Raftree.