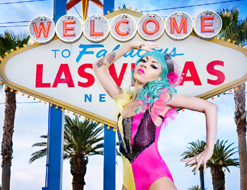 The clip for “The Fast Lane” is, we’re told, shot on location in Raquel Reed’s life. We’ve got no reason to doubt it, and considerable reason to envy it. One thing is certain: Raquel Reed’s life is not like yours. It’s pastel-bright and wildly energetic, filled with toys and tricks and candy-paint. She drives a champagne-colored ’64 Impala borrowed from Dubai royalty. Her house is an outrageous pink and purple structure that looks made of gingerbread. Her clothes feature fishnets, matchbox cars, bicycle handles. She sings into a gold-plated microphone. And, oh, yes — her hair is a vibrant shade of turquoise.

So eye-catching is Raquel Reed’s appearance that it’s sometimes easy to forget — momentarily — the important stuff. “The Fast Lane” isn’t just a convenient vehicle for an attention-getting parvenu — it’s also a superb track. Indeed, Raquel Reed has all the makings of a top-drawer pop star. She’s got the looks, the stance, the attitude, the vocal i.d. and microphone presence, an impeccable feel of time, and an inspired, visionary fashion sense. Comparisons to Ke$ha and Lady GaGa are instructive, but insufficient: Reed has been a Downtown NYC fixture for longer than either, and she’s developed a singular style and sound all her own.

“The Fast Lane” is poised to bring the rest of America to the nightclub. It’s a guaranteed party starter, crammed with infectious riffs, squiggly sine-wave synthesizer, and big, splashy beats. Enthusiastically produced by Adam Deitsch and Chris Pinset — who’ve worked with Redman, 50cent, Ledesi , and Wyclef,, among others — “The Fast Lane” seems guaranteed to tear up dancefloors straight through the summer. But as flashy as this record sounds, Raquel Reed lets you know she’s the star, with a performance that’s simltaneously urgent and bemused. She’s singing about urgency, intensity, desire — everything it means to be young, colorful, and (just barely) in control.

Like Deitch and Pinset, director Mario Pignard, Jr. has worked with the legendary Redman, too — and there’s more than a few supersonic rap video conventions in the clip for “The Fast Lane”. It’s creatively letterboxed, with action taking place in the strips above and below the main image. Pignard uses creative frames — stars, sliding rectangles, footage that slips like viewmaster slides — and he jumps back and forth between two different scenes in split-second oscillations. And then there’s Reed herself, who commands the camera with an emcee’s authority. Her shoes and jewelry are special effects of their own, and her comfort before the lens, honed by years of fashion shoots and time spend under the club lights, marks her as a video star in the making.

It’s our distinct pleasure to be working with Raquel Reed and the folks at Death House to bring you this stunning and colorful new clip. If you need more info, call Andy Gesner at 732-613-1779 or e-mail us at info@HIPVideoPromo.com. You can also visitwww.IHateRaquelReed.com  to find out more about Raquel Reed.