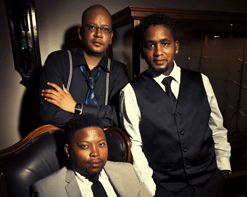 Hailing from Cape Town, South Africa, Rique Nelson has earned a reputation for being one of the hardest working, most energetic and entertaining live acts anywhere. In a short space of time, he has become the new Dynamo of R&B/ Pop music in South Africa. HIP Video Promo is pleased to present his newest video “I Wanted To” featuring Raymon Spitfire to a wider audience and to bring this epic talent to new eyeballs.

At the young age of thirteen, he was already capturing the hearts and souls of his audiences with his electrifying, somewhat funky, yet smooth voice. After graduating at Cape Music Institute in Cape Town with vocals as a major, Rique performed with various bands and sang background vocals for other artists. In 2011, Rique and his erstwhile college friends formed a band called INK. INK took the local Cape Town market by storm and after a short stint, the friends agreed to move on. For Rique this was a turning point as his music career bloomed with a band called The 4Mula where he is currently the lead singer.

The 4Mula later released their self-titled debut album at the beginning of the year. Rique recently hooked up with music producer, Elton Lodewyk, also known as Elly Jay, and songwriter, Roberto Arries. This led to the release of Rique Nelson’s first single and music video “Looking at You,” which was rated amongst the SA TOP 10 for 13 consecutive weeks by HEART 104.9 FM. At the moment, this R&B musician spends his time promoting his new album, Here I Am, which will hit the local market in October 2013.

“I Wanted To” gives us a glimpse into this extremely talented artists’ musical career. With a show-stopping demeanor, this rising star shows off his love for music in this clip. As he is turned away by the love of his life, we watch as he sings on her doorstep and sits through the stormy and rainy night, dedicated to his cause. Filled with amazing choreography, “I Wanted To” is a clip that captures the true essence of Rique’s incredible ability to shine. The song features Raymon Spitfire, who adds an undeniable amount of flavor to this fantastic tune, and elevates and already outstanding track to the next level.

As a performer, Rique Nelson is undeniable and “I Wanted To” is the perfect teaser for this budding artists’ new album Here I Am, which will be available this fall. For more information and exciting news, please contact Andy Gesner and the HIP Video Promo staff at (732)-613-1779 or email us at info@HIPVideoPromo.com .