Rise Against “Give It All” 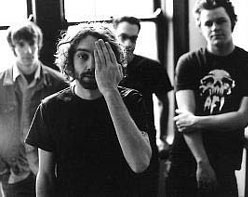 With the presidential election only a month away, it’s Andy Gesner and the staff here at HIP Video Promo with a (mostly) rhetorical question for you: who says that protest music is dead? During this highly charged political season, important bands from Kill Radio to Papa Roach have attempted interventions in the national discourse. We’ve seen their videos, absorbed their statements, and applauded them for having the courage to take a stand. We’ve even gotten polemical statements from bands not ordinarily considered political – such is the heat of the election season that it has brought out the commentator and agitator in almost every American.

But nobody would ever accuse Warped Tour favorites Rise Against of shying away from controversial issues. Throughout their five years of recording, the combatively named Chicago post-hardcore four-piece has never needed any encouragement to kick against the powers that be. Articulate and committed to egalitarian principles, Rise Against stays true to the original progressive vision of hardcore: an end to discrimination, an end to war, mind liberation and community responsibility

Siren Song Of The Counter Culture picks up where 2002’s electrifyingRevolutions Per Minute left off. Listeners still recovering from exposure to the bracing, polemical “Blood Red, White And Blue” and “Black Masks And Gasoline” will find on this album extensions of those incendiary lyrical concerns and a refinement of the Rise Against arrangement logic. The rhythm section slams at their instruments with abandon, the guitar riffs sting like a lash, and the inventive bass lines climb and swing, sway, stagger and slap like breakers. Most remarkably, singer Tim McIlrath keeps his lyrics comprehensible: he screams, sure, but he always makes sure you’re getting the message.

“Give It All” is a fast-moving tsunami of a single – caustic and anthemic, it’s at once frustrated and inspired. The verse crashes in like merciless, nostril-clearing hardcore, but the pounding gives way to a singalong chorus that recalls classic Soul Asylum. Underneath the rafter-shaking release, the bass walks a scale pattern; it supports the melody, and builds like a gathering head of steam.

Veteran video director James Cox shoots Rise Against in an appropriately proletarian setting: public transit. The band sets up at the forward end of a subway car, and performs the song (with all requisite energy and enthusiasm) in rush hour traffic. The riders don’t seem to mind – they gather around the band, singing along with their arms raised. There’s no division effected between the performers and their audience – the fans of the band stand shoulder to shoulder with McIlrath. Any of these young faces could be the deliverer of the Rise Against message.

A few of the riders on the train are engaged in surreptitious activity. We watch them stuff their carry-bags with spray paint, magic markers, videocassettes. Are they going to a protest? In a sense, yes – but they’re not headed to a public demonstration. Instead, they’re attacking the ideology of the city under the cover of night: defacing billboards, advertisements, and symbols of institutional power. A bright yellow burger ad becomes a public service announcement about heart disease. A bus-stop light box advertising a perfume becomes a feminist resistance piece. A lion in a local zoo (and, later, the CEO of the company that these night-time “no code” warriors work for by day) has a sympathetic sticker attached to his pen: “I have spent my whole life in a cage”. Spying a different kind of sticker affixed to a bumper – one reading “four more years” – the guerilla agitator superposes another atop it. “One More Month”, it promises. Rise Against are unafraid to rock both the musical and political boat.

As always it’s a pleasure to be working closely with our good friends Lisa Frank & Christian Taylor at Geffen Records to promote this hard rocking band. Rise Against have a very high profile fall tour planned with Bad Religion, and they will be available for interviews and video IDs for any programmer who would like to come out and see this amazing band live. We also have CDs, stickers, posters and other Rise Against goodies to help get the word out. If you need more info, call Andy Gesner at (732) 613-1779, or email info@HIPVideoPromo.com. You can also visit Geffen Records to find out more about this musical force to be reckoned with. The band’s official website is HERE.