Rise Against “Swing Life Away” 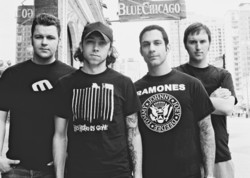 How’s it going everybody? It’s Andy Gesner and the staff from HIP Video Promo back with more music video love from one of our favorite bands. When we last sent you a video from Rise Against, it was the height of the 2004 election season. “Give It All” was the political punk rockers’ intervention in the national debate: a fiery protest anthem meant to stimulate discussion and elevate minds. The clip for “Give It All” followed the adventures of a band of secret saboteurs – office-workers by day, challengers of corporate culture by night. It was energetic, urgent, and brilliantly idealistic; a call to arms and a last-ditch stand against the pressures of conformity.

Eight months later, it’s safe to say that the election – and the nation – didn’t go the way Tim McIlrath and his band were hoping it would. And just as the Jefferson Airplane once followed the tumultuous “Volunteers” with the rueful, drained “Song For All Seasons” after the debacle at the 1968 Democratic Convention, Rise Against answers the desperate, civic-minded hope of “Give It All” with the quiet, personal “Swing Life Away”. Here is a love song set among the young, struggling working-class in Chicago: a poem of persistence in the face of hardship, and the cold dawning of adulthood.

While it’s a surprisingly sensitive acoustic ballad played by a band best known for their ferocious rock sound, there’s a way in which “Swing Life Away” is more representative of Siren Song Of The Counter Culture than “Give It All” was. A “siren song” is an alluring melody, for sure – but the term also implies danger and deception. Siren songs are often the last tune played before the elegy. That’s not to imply that the strenuous hardcore ideology of prior Rise Against records (like the uncompromising Revolutions Per Minute) have been diluted on Siren Song: McIlrath would sooner trade in his guitar than betray his progressive political commitments. But if you think that’s a note of ambivalence and exhaustion you’re hearing on their Geffen debut, your ears aren’t fooling you.

Along with “Paper Wings” and “Blood To Blood”, “Swing Life Away” is one of a trilogy of hard-eyed, deeply emotional tracks on Siren Song Of The Counter Culture. McIlrath’s gift is his ability to make seamless transitions between his overtly sociopolitical sentiment and his impressionistic stories of defiant kids coping with troubled relationships. Strumming roughly on an acoustic guitar and singing in a rough voice that occasionally descends to a whisper, he spins out a gentle anthem for aimless lovers. “We live on front porches and swing life away”, and then, ever the political economist at heart, adds “we get by just fine here on minimum wage”. Not defensively, not bitterly; just a statement of fact.

The “Give It All” video captured the Chicago El at night, and followed its purposeful riders as they embarked on their course of determined civil disobedience. The clip for “Swing Life Away” opens with shots of the train, too. But this time, it’s daytime – and instead of a clandestine young-leftist strike force, we’re instead shown a day in the life of Tim McIlrath. The frontman is portrayed as an intense, serious, but somewhat overwhelmed young artist – some sadness behind those wide eyes, but motivated more by indirection than defiance. He drifts through the deserted streets, past boarded-up windows and abandoned shopping trolleys, into friends’ houses and a boozy pub. Wherever he goes, he writes; he observes what he sees, and commits his experience to a home tape recording. When he’s confronted in a bar by a drunken thug who crushes that tape under his heel, McIlrath doesn’t fight back. He steps away from the injustice, goes home, gets his pen out, and keeps writing.

Rise Against inspires us here at HIP, and we know many of you share our passion for this deserving quartet. It’s great to be working with Lisa Frank and Christian Taylor at Geffen Records, as well as our friends Rise Against. If you would like to set up on-air giveaways, or a special Rise Against promotion, please don’t hesitate to get in touch. We would love to set up video interviews or IDs for all the West Coast programmers when Rise Against comes through your area on tour supporting Alkaline Trio. If there was ever a band not to be missed live when they come to your market, Rise Against is that band. If you need more info call Andy Gesner at 732-613-1779, or email info@HIPVideoPromo.com. You can also visit www.Geffen.com, or www.RiseAgainst.com to find out more about Rise Against.