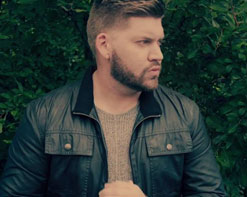 Boston’s own Brandon Michael taps into a deep well of influences to create a sound that he believes will last a lifetime. It’s appropriate then that his debut album was named Timeless. Though he only wrote his first song at the age of 18, this 23 year old is a quick study and quickly immersed himself in the worlds of everyone from One Republic to Michael Jackson to Justin Timberlake.

In order to create the most dynamic debut he linked up with producer R.K. Jackson and songwriter Jimmie Alston to turn Timeless into a work worthy of its name. Jackson’s impressive resume of remix and production credits for Rihanna, Madonna, Cece Peniston (whose classic “Finally” is one of his proudest), and DJ Markus Shulz made the pair a natural fit. Jackson’s breadth of knowledge and Michael’s talent wowed audiences worldwide.

When Jackson was creating his new single for “Too Far To Let Go,” he was looking to add a voice that would inject a fresh excitement into his track. He was looking for “young talent with awesome voices and right now, Brandon tops that list!”

“Too Far To Let Go” is an action-packed video that shows just how far Brandon is willing to go to preserve everything that is dear to him. The clip quickly launches into an action sequence of Brandon fearlessly breaking in to save his girl from a nefarious pair of kidnappers. How she got there is unclear, but as scenes of Brandon and her bonding across the Massachusetts landscape come on screen it’s readily apparent why he would move mountains for her.

We’re very proud to be a part of this outstanding team of talent and are here to make sure this video gets a shot in your programming, so please don’t hesitate to get in touch! Please contact Andy Gesner and the HIP Video Promo staff at (732)-613-1779, email us at info@HIPVideoPromo.com. You can also visit www.Facebook.com/IAmBrandonMichael for more info on Brandon Michael and R.K. Jackson.