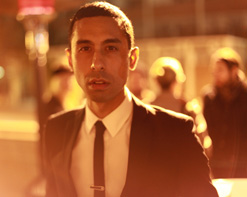 Love is anything but simple… ever. It’s always complex, sophisticated, uncertain and defies the laws of all and none at the same time. It’s Andy Gesner and the HIP crew, here with unusually abstract take on the subject of wooing that will boggle and amaze simultaneously. Signed to the Steve Aoki imprint Dim Mak Records, Robert Raimon Roy (also known as Rob Roy) is here with a slightly more formal stage name and a larger than life video for “Little Egypt Wavy,” the first single off of his third album, Le Tigre Blanc.

Labeled as a monstrous and unforgiving boundary breaker of the genre and discovered by Erykah Badu, Robert Raimon Roy is probably the most inventive rapper to not hit the mainstream jackpot yet. And by yet, we mean he will when his album drops and people hear the phenomenal production and talent that is encapsulated on Le Tigre Blanc. Hyper-elite underground music society blogs like Madbury Clubboldly claim that “we’ve got our Toro y Moi’s, the Weeknd, and even some Drake and James Blake mash up tapes floating around to fill some sonic gaps, but no single artist is touching this many plateaus on his own two feet.” Perhaps the most famous work Roy had put out so far is his single for “Fur In My Cap,” which has had the internet going nuts with the likes of Kanye West, Pharrell Williams, Justin Timberlake, Travis Barker, Chris Brown and ?uestlove all giving props and praise to the multi-talented rapper/singer/producer. The song was also featured in an episode of Entourage, and boasts an immense amount of VEVO viewers. Roy was also featured in spreads for NYLON Guys, Giant Magazine, URB Magazine,The Believer, and Billboard. With the upcoming onslaught of his third full-length, Roy has got the blogosphere up in arms!Rebel, Video Static, ILLROOTS, HIPHOPRUCKUS, dubFrequency, Recession-Proofmuzik and many more are all passionately rampant about how incredible “Little Egypt Wavy” is and how it is unlike anything they’ve heard before. Perhaps not only will Roy be sitting on the throne soon, but it will be in sound and genre that does not yet exist. He’s already shared the stage with Wu Tang Clan, A-Trak, Travis Barker, Steve Aoki, DJ Quik, Dwele (Slum Village), Mistah FAB, Kid Sister, Yelawolf, Das Racist, Tinie Tempah, Theophilus London, and many more.

“Little Egypt Wavy” finds the ambitious rapper constructing a hybrid environment, where many ideas (e.g., Electra and Oedipal complexes, antiquity, Internet slang) around a single topic —“love” as the triumph of hope over self-knowledge—coexist in conflict. This collagist theatre allows for a more nuanced view of courtship, one that is uncertain and complex. To quote Oscar Wilde on the subject, “We locate inside another a perfection that eludes us within ourselves, and through union with the beloved, hope somehow to maintain a precarious faith in the species.” What starts out with synths that sound like they’re being sucked through a Hoover vacuum, evolves into a grand opus in sonic gesticulation. The track evolves from a heavy beat and aggressive rhyme schemes into soaring autotuned falsetto scales harmonized over a lifting melody. Directed by Peter J. Brant, the video for “Little Egypt Wavy” channels a 90’s VHS tape mash up meets Videodrome, marked by wobbly frames, abstract and mystifying imagery and severed film strips.

When it comes to finding artists that defy the sonic barrier, Dim Mak always delivers. Robert Raimon Roy is the definition of trendsetter and we have no doubt that this will be his time to shine, as there isn’t anyone else like him in the genre. We’ll have copies of Le Tigre Blanc available in the near future, so if you’re interested in getting some copies in your hands for giveaways, let us know right away. If you need more info, call Andy Gesner at 732-613-1779 or e-mail us at info@HIPVideoPromo.com . You can also visit www.DimMak.com to find out more about Robert Raimon Roy and any appearances near you.