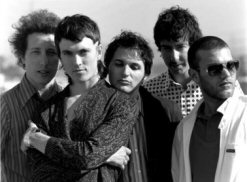 Hi everyone! It’s Andy Gesner and the staff at HIP Video with one of the most clever, upbeat and catchy videos we have promoted in a long time! Virgin Records and HIP Video are proud to present IMA ROBOT, a five piece from Los Angeles that create an irresistible sound that is a mix of Glam, New Wave, Punk and 80’s fashion. A musical collision incorporating the best of The Undertones, Devo, The Buzzcocks and Talking Heads, IMA ROBOT still manage to make it all seem new and notable. “Dynomite” is the first single and video and a sure panacea to the short attention-span generation, with it’s short length, rapid cuts and multiple locations.

This is also quite a “feel good” video. At only two minutes and twenty-three seconds, it’s a bit of a “quick glimpse” throwback – “Dynomite” incorporates most of what made New Wave fun back in the early 80s. It’s loose, lively, and utterly accessible – an acquired taste that can be acquired during the first fifteen or twenty seconds. It’s glib, even a bit cocky, but it forces you to remember that music is about having fun.

Through the first minute or so of the clip, the impression is that this is just the band performing in what is obviously their own element – a cramped, low-ceilinged somewhat divey club setting. Then – Dynomite! – director Roman Copolla (yes, of the Hollywood Copollas) doesn’t just reach into his bag of tricks, he turns it inside out and dumps it all over the place. The settings and effects change with breathtaking speed and crackling energy. The result is dazzling, hallucinogenic, surreal – as the band is transported into a feverish chorus line send-up, then transmuted into colorful, amorphous automata like some characters from a demented Saturday morning cartoon. The end result is a two and a half minute thrill ride that will have you wanting to get right back on for another spin.

Ima Robot have quite a musical pedigree. Collectively, the members of the band have worked with Beck for about ten years. Additionally, they have worked with Mars Volta, REM, Tori Amos, Johnny Cash, The Vines, and The Smashing Pumpkins, to list a few. This resume highlights both their outstanding professionalism and remarkable versatility. We are thrilled here at HIP Video to be along for the IMA Robot roller coaster ride (the new CD comes out on September 16th) and are always stoked to work with Amani Duncan and Jeannette Echeverri at Virgin Records. Call Andy Gesner at HIP Video Promo at 732-613-1779 or e-mail info@HIPVideoPromo.com to get all your IMA ROBOT updates. We are going for adds for the IMA ROBOT “Dynomite” video on August 22nd and August 25th.