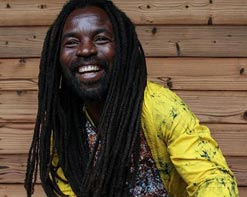 Cumbancha recording artist Rocky Dawuni releases his new music video for the hit single “African Thriller” today in partnership withEntertainmentWeekly.com. The timing of the video launch occurs just a few days after the 40th anniversary of the legendary “Rumble in the Jungle” boxing match between Muhammad Ali and George Foreman, and the video draws inspiration from that momentous event. At a time when news about Africa is dominated by the Ebola crisis, “African Thriller” offers a positive message celebrating African strength, unity and indomitable spirit. Follow this link to view the video on EntertainmentWeekly.com

“African Thriller,” sung in West African pidgin English, embodies Rocky Dawuni’s unique “Afro-Roots” sound, a funky blend of soul, pop, Afrobeat and reggae grooves that have made him a household name in his native Ghana and earned him a wide following across the globe. Jeremy Sole, a DJ, producer and host on the taste-defining Los Angeles radio station KCRW, remixed the single version of “African Thriller.”

The video places the viewer immediately within the dynamic metaphorical space of a boxing gym, revealing the preparations of a prizefighter. Cloaked in the symbolic and unifying colors of the African motherland – red, gold, and green, and with a black star prominently embroidered on the back of the fighter’s robe, our hero skips rope in time with the song’s initial beats. As the rhythm builds, a classic throwback microphone descends, in slow motion, from the ceiling (a la Raging Bull) and is eventually wielded by Dawuni himself. In a profile shot, beautifully filmed in warm light, this moment deftly collapses the studio/stage/ring setting into one space – Dawuni wears House of Marley brand headphones, as if recording, yet he appears poised to introduce the ultimate “African Thriller.” What follows is a vibrant expression of communal spirit, and ultimately everyone is invited to jump in the ring and join the dance battle.

According to Rocky Dawuni, “‘African Thriller’ is a persona, a concept and a vision of what contemporary beauty and excitement will emerge from the confrontation and collision of cultures. The video hints at historical and cultural signposts in a metaphoric expression of how the dance floor is one of the ultimate and most colorful places for global unity, celebration and liberation.”

Rocky Dawuni and his team are excited for this video to inspire others to “shake it till it go be hot, hot!” Rocky is asking fans to send in their “African Thiller” inspired dance-videos and will soon be announcing an upcoming remix contest. Stay tuned on Cumbancha’s and Rocky’s website and social media outlets for more details. For more information please contact Andy Gesner and the HIP Video Promo crew at (732)-613-1779 or email us at info@HIPVideoPromo.com. You can also visit www.RockyDawuni.com/ for more info on Rocky Dawuni.