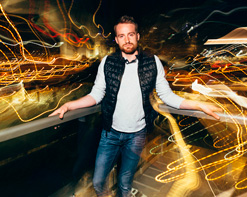 Blending his knack for striking a balance of pop rock radio and out of the box, creative instrumentation, Roger Jaeger has quickly established himself as an inspiring and refreshing artist. The Oklahoma native’s third album, Start Over, reflects the sentiments and convictions Roger has gathered along his personal journey of discovery. Today we are excited to share with you not one, but two, of his excellent tracks from the album, “Elevator” and“Start Over.”

Perhaps most formative was the time he spent living abroad in India. While there he fell in love with the sitar and developed a strong devotion and passion for the country, its people, and its culture. From there he began infusing his modern Coldplay-esque sound with eastern influences and the unmistakeable sound of the sitar.

Fans and industry alike are taking notice as well. In 2016 Roger signed 15 sync licenses with major television networks like Discovery, MTV, and NASCAR. 2017 has Roger hitting the road in support of Start Over including a Texas tour in March as well as a tour of California. We could carry on about the praise surrounding Roger Jaeger, but what really matters is letting the music videos do the talking!

The lead video of the pair, “Elevator,” finds inspiration everywhere from the city lights to secluded coastal enclaves. While Roger and his group deliver an engaging performance on the rooftops of downtown Nashville, a story of Roger navigating wildly contrasting landscapes plays out on screen. It begins with a rather corporate and defeated looking Roger stepping out of a pair of elevator doors into a personal journey that will fundamentally change him. Jumping down waterfalls, traversing the searing desert, and a rocky night on the sea are all setting the stage for Roger to leave the mundane behind and literally swim for his life, a new life and perspective awaiting him on the shore.

On the second video, “Start Over,” Roger treats viewers to his love of the sitar and his ability to take the exotic instrument into the mainstream. The wintery clip finds Roger feverishly chasing down an elusive girl throughout an abandoned apartment building. Whether she’s a real person or just a vivid memory, Roger’s determination to set things right is clear. His cathartic dismantling of the room around him is a stark reminder that sometimes it needs to all be torn down in order to build it up again. Amongst it all Roger treats viewers to an exquisite solo on his beloved sitar, which really sets this clip apart from its peers!

We’re very eager to get both of these videos in front of programmers and viewers alike! Roger is an artist that we expect to be making a big splash in 2017 and now’s the time to get in on the ground floor, so please contact Andy Gesner and the HIP Video Promo team at (732)-613-1779, email us at info@HIPVideoPromo.com. You can also visit www.RogerJaegerMusic.com or www.Facebook.com/RogerJaegerMusic for more info on Roger Jaeger.