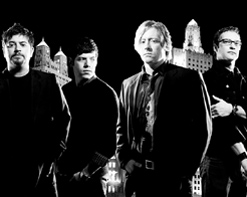 Greetings programming friends! It’s Andy Gesner and the staff from HIP Video Promo, here with another terrific, evocative video from an emerging band. Kansas City isn’t usually considered one of the nation’s musical hotspots, but there’s always been a fantastic, polyglot underground scene there. Lately, Roman Numerals have been the kings of that scene, earning raves in the Kansas City Star and other Midwestern music publications. KC is a city at the crossroads of America, and has always produced artists who draw from different styles. There’s nothing typical about the RNs, but in this regard, they’re a quintessential Kansas City band, disregarding genre convention to produce a unique hybrid of rock, punk, synth-pop, Eighties alt-revivalism, and euro-techno..

Their self-titled debut announces the arrival of an electrifying indie combo: a challenging quartet who rock as fiercely with synths as they do with six-strings. All four members of Roman Numerals are credited with synthesizer and electronics, and their arrangements are texturally complex: space-effects, ghostly reverb, programmed beats cleverly blended with Pete LaPorte’s live drum performances. But this is a rock band: and for the most part, Roman Numerals grind art-damaged riffs out of their analog synths that complement the ferocious, angular guitar playing. Steven Tulipana and William Smith sing lyrics of dislocation and loss in rough, tense, electro-processed voices. The album is as reminiscent of Turn On The Bright Lights as it is evocative of the work old-school alt-rockers like Gang Of Four and The Chameleons UK, but there’s a dystopian sci-fi vibe to Roman Numerals that is distinct to this quartet. (The title of “The Rule Of V”, the lead single from Roman Numerals, is a reference to a central principle in the Illuminatus! Trilogy.)

Renowned across the Midwest for their incendiary stage show, the RNs continue to tour the nation relentlessly; at this writing, they’re preparing for a local Kansas City concert with Casket Salesmen and the Architects before leaving for a month-long swing through the Rockies and California. A video that didn’t show off Roman Numerals onstage would’ve been misleading – but a clip that simply presented performance footage of the band wouldn’t have captured the weird, futuristic feel of the music. Directors Bob Moczydlowsky (also the group’s manager, and a key man on the KC scene) and Bill McShane have risen to the challenge with an arresting clip for “The Rule Of V” that juxtaposes images of the RNs in action with still shots of a night-time Japanese cityscape.

To add to the disquieting noir feel of the video, the directors have run the footage through a processor that throws thin black lines on the screen. The effect makes it look like we’re watching Roman Numerals on an old-style computer terminal, or perhaps through very narrow Venetian blinds. As the camera swoops and dives around the stage, the band seems almost too bright – explosions of color against a black background, pouring through the horizontal streaks. The clip de-naturalizes the group, making the bandmembers appear like characters in anime, or live-action versions of characters torn from the pages ofNeuromancer: ghosts in the machine, stalking the cyber-alleys of a pixellated Tokyo.

Our introduction to Brandon Phillips and the folks at Anodyne Records has been very exciting and we’re very proud to be working together to bring you this deserving video. They have hooked us up with plenty of copies of Roman Numerals for all of your on-air giveaways. The band will also be on tour through the end of March and into April, so if you would like to grab an interview with them when they come through your town, don’t hesitate to be in touch. If you need more info, call Andy Gesner at 732-613-1779 or e-mail us at info@HIPVideoPromo.com. You can also visit www.TheRomanNumerals.com to find out more about The Roman Numerals.