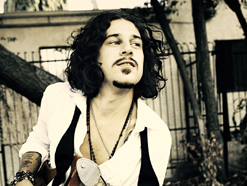 Greetings to our beloved music video programming family! HIP Video Promo is pleased to present the latest clip from a terrific young songwriter we’re proud to be working with. Any lingering doubts about whether Ryan Cabrera is truly a rocker can be put to rest now. “Enemies,” the new single from the accomplished The Moon Under Water that Metro Mix notes “…is big and stadium ready,” is a bracing listen: this is heartfelt, powerful and passionately-performed modern rock, closer to All-American Rejects or Paramore than anything scaling the soft side of the pop charts. What’s more, like every move Cabrera makes these days, it’s resolutely independent, self-released and self-made. The singer tells his story of romantic betrayal and cheating hearts – lovers who secretly “want to get caught” – with the authority of lived experience. Everything here has the ring of truth.

And that’s exactly the sort of album The Moon Under Water is: confessional, honest, straightforward and crammed with sharply-observed songs about the milieu the singer has inhabited for the past few years. Some have called it an album of L.A. stories, and that it could be – but it could also be about your town, or my town or any town that’s touched by the entertainment industry and the culture of vanity it engenders. His hometown daily paper, The Dallas Morning News, notes how it is “an album that is all his own, alterna-gritty and real,” and the Cleveland Free Times remarks, “His debut album made him a pop star, but The Moon Under Water could make Cabrera a respected musician.” Metro Mix continues “… it must be noted that the guy has a naturally clear voice, less pitch-corrected and polished than most modern-day pop-rockers,” while Philly.com declares “there are few recent pop artists who connect with an audience the way singer/songwriter Ryan Cabrera does.” Cabrera certainly hasn’t turned his back on entertainment: his new songs are tuneful, harmonically rich, beautifully-produced and a hell of a lot of fun. They’re all worthy successors to the chart-toppers he had at the beginning of this decade. But there’s no disguising the dark undercurrents in his recent writing and we’re guessing that Cabrera himself has no intention of concealing the turmoil that animates his latest release.

“Say,” the first single from The Moon Under Water, was upbeat – a raucous party-track, all shouts and stinging six-string. It was wildly, unapologetically romantic, and its video reflected that spirit. “Enemies” is the flip-side of that: it’s a late-night number born of interpersonal confusion and serious relationship trouble. It’s also got a bracing verse and a soaring chorus, and Ryan Cabrera discharges his performance like his life is on the line – and perhaps, in a way, it is. Listen without prejudice and you’re bound to come to the same conclusion we did – this is one of the finest radio-rock anthems of summer ’08.

That desperation is all over Cabrera’s face in the emotionally forthright clip for “Enemies.” The singer-songwriter performs in a cage of light: he and his band are framed by the windows of skyscrapers at night. We know we’re in a dark cityscape – and just like Los Angeles, this artificial metropolis feels expansive yet oddly claustrophobia-inducing. As the Cabrera band tears through “Enemies,” footage of beautiful people in action are projected onto the screen – we see them kissing, fighting, losing track of each other and drifting around the urban ether. Cabrera’s girl comes home to find him in bed with another woman. In the ugly aftermath it’s hard to tell whether he’s fighting with his girlfriend, his mistress or himself. We watch her expression change from one of anger to one of disgust to one of defeat – like everybody else, she’s overwhelmed by the confusion of the streets, the roar of the hot lights and the dizziness of speed.

It’s our great pleasure to once again work together with Richard Channer and the whole crew at Papa Joe Records to bring you this edgy new clip. Please let us know if you’d like to get your hands on any copies of The Moon Under Water for your on-air giveaway needs and we’ll hook it up. If you need more info, call Andy Gesner or Rob Fitzgerald at 732-613-1779 or e-mail us at info@HIPVideoPromo.com. You can also visit www.RyanCabrera.com to find out more about Ryan Cabrera.