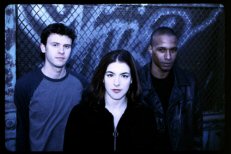 Sexy, Sultry, Sassy…Saucy!!! The Saucers hail from just north of where Debbie Harry ate cars and bars, and just east of where Chrissy Hynde found her balls. Sound tasty? They go down easy BUT do not be fooled! Led by the beautiful “La Mere” (lead singer, guitar and bass), they pack a punch and the intoxication may just sneak up on you and by the time you realize it – Look Out! You’ve been Sauced.

The Saucers (La Mere, Touch, Mr. Sala) have created the enviable and often times elusive buzz that every band covets. Sure enough, they selected video to introduce their smooth yet strong sound to an unsuspecting public, prior to the release of their debut CD, Eternal Intermission.

“La Mere’s” voice is powerful, confident and lucid, yet she repeatedly and proudly proclaims herself “the Queen of Failure” in the chorus of “Late Bloomer,” the first single and video from this sizzling band’s upcoming CD. Mere’s soulful and assertive delivery propels the song and gives the viewer a glimpse of her no nonsense approach to concocting deeply personal, easily relatable and anthemic tunes. The framing tale follows the misadventures of the title character, ostensibly a frumpish, bespectacled young city dweller; through what seems to be a typically dreadful day.

The unlikely heroine suffers all manner of indignities, including being nearly run down by a cyclist, and a very large man; being ignored by multiple available cab drivers, and having her glasses stolen and broken by a bratty child. After one final humiliation (involving an anxious, overly hydrated pooch), she sheds her frumpy, wet, outer garments and undergoes an instant metamorphosis into a stunning thing of beauty…(“Late Bloomer” indeed!) Director Gregg Simon weaves the scene around two parallel performances, one featuring the band, performing al fresco in Brooklyn’s DUMBO section (Down Under the Manhattan Bridge Overpass), the other of Mere strolling solo and delivering an emotionally charged rendition of this subtly crafted tune.

Hip Video and The Saucers’ label, Exotic Recordings, wants to make it easy for you to “Get Sauced with The Saucers”. Any programmer that adds The Saucers “Late Bloomer” video for the add dates of June 6th and June 9th enters a drawing to win an “exclusive Exotic Recordings/Saucers bar set” – a custom collection that includes all the implements you need to make your drinking experience complete, each imprinted with the Saucers logo – presented on a night out on the town with Mere and Lena Chen.
* For more info call Andy Gesner at HIP Video Promo at 732-613-1779 or e-mail info@HIPVideoPromo.com  .

* If you are not from the New York City area, we will make arrangements to ship the bar set to you and the night out on the town is good for WHENEVER you do make it back to NYC!!! Just please give 2-4 weeks notice!!!

For more about this very cool band, visit their official page here