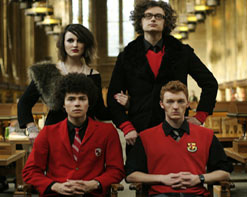 Warmest regards to all my music video programming pals! It’s Andy Gesner and the staff from HIP Video Promo, back again to help spread the word about an emerging band with a powerful visual signature. Schoolyard Heroes have established themselves as one of the hottest bands on the West Coast punk-metal scene, forging an original and immediately identifiable sound without relying on gimmickry. Singer Ryann Donnelly, who has been called an “evil Gwen Stefani” (but whose theatrical energy and flamboyance is actually more reminiscent of Kathleen Hanna or even Karen-O) is a small powerhouse – a frontwoman who commands the rapt attention of audiences through the sheer force of her will and talent. The Washington State quartet has released two enthusiastically-received albums through The Control Group, the independent label that has become a driving force behind the Seattle’s musical re-emergence.

Fantastic Wounds, the band’s recently-released sophomore album, recapitulates the themes and motifs that have made Schoolyard Heroes one of the hottest names to drop in the Great Northwest: horrorcore, old B-movies, zombies and monsters as metaphors for relationship troubles, poison, disease, and science-fiction. Lest you think that sounds like a downer, rest assured that the tone throughout is raucous and near-celebratory – while it’s safe to assume the body count on any Schoolyard Heroes album is going to be high, there’s always something delirious and transcendent about all the carnage. “I’m convinced you’d be so gorgeous/ if your face existed”, deadpans Donnelly on the truly upsetting-yet-hilarious “The Girl Who Was Born Without A Face”. Like the Misfits and The Cramps – two classic groups that this quartet often resemble – Schoolyard Heroes knows how to make the cemetery swing.

The band simply isn’t like anything else out there on the punk scene right now. Drawing inspiration from theatrical metal, radio pop, prog-rock, and even classical music, the combo plays with fury, rare intelligence, and an apparent sense of humor. Start-stop rhythms give way to machine-gun bursts of bass and rhythm guitar; intricate wiry leads descend into heavy distorted crunch, and then soar back into the flames. Donnelly pulls it all together with performances that are almost freakish in their intensity – her voice is supple and near-operatic, and when she turns those pipes on a screamer, she can shriek with the bugged-out lunacy of the young Bruce Dickinson.

As you might expect from a band with song titles like “Serial Killers Know How To Party”, “The Mechanical Man vs. The Robot From Outer Limits”, and the truly disturbing “Funeral Parlor Tricks”, the Schoolyard Heroes write lyrics that are macabre-literate, frequently laugh-out-loud funny, and sometimes surprisingly moving. On “They Live”, the lead single fromFantastic Wounds, Donnelly discusses sutures, and tells a possibly-undead lover “we’ll celebrate with amputations”. Yet as the band storms away behind her, and she surveys her world and finds it deadening and soulless, the metaphor becomes completely palpable.

None of this would work nearly as well as it does if Donnelly wasn’t such an eyeful. The 20-year-old singer is almost ridiculously camera-ready: she’s gorgeous, even in her horror-movie make-up. Donnelly regularly performs in prom dresses and sneakers, highlighting her femininity even as she sings her Danzig-like stories. The rest of the group is similarly entertaining to watch – they’re frenetic performers with a subtle poise that belies their youth. The “They Live” clip catches Schoolyard Heroes in concert, and demonstrates the sort of excitement they can generate – hair in her eyes, dress bunched up and sweaty, Donnelly whips the youthful crowd into a delirium.

It is our great privilege to work with Nabil Ayers and all the great folks at The Control Group again promoting the excellent new Schoolyard Heroes “They Live” clip. We have plenty of Fantastic Wounds CDs for on-air giveaways and the band will be touring all throughout 2006. This is a band you must see live to get the full scope of their rock and roll prowess, so please get in touch if you would like to set up a video interview or be in attendance when this musical tsunami visit your market. If you need more info call Andy Gesner at 732-613-1779, or email info@HIPVideoPromo.com. You can also visit www.ControlGroupCo.com or www.SchoolyardHeroes.com to find out more about Schoolyard Heroes.