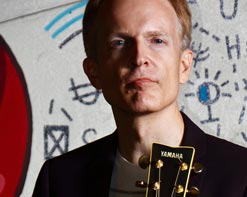 Secret Friend has been wowing viewers since delivering a trifecta of enthralling videos late last year. After whetting palettes across the globe, the next video for “Do You?” proved to be like nothing we’d seen before. It was a brilliant concoction of visual stimulation that demanded multiple views just to wrap our collective heads around it.

Of course, setting such a high bar puts a lot of pressure on the artist. Fortunately for Steven Fox, the man behind Secret Friend, he had just want the doctor ordered up his sleeve. True to expectations, the new video for “Diving In A Sea Of Light” is as diverse and ambitious visually as Secret Friend is musically. Fox has established himself as an artist who is unafraid to take unlikely musical bedfellows and bake them together into something undeniably enthralling.

Like much of the full length album Sleeper, the new single for “Diving In A Sea Of Light,” Fox swings effortlessly between genres, mixing electronic elements with everything from Motown-inspired bass to muted jazz trumpets. It clocks in at just over 7 minutes long, but it never feels laborious or meandering. Instead, each section serves a deliberate purpose, ultimately piecing together a song with multiple captivating chapters lined up one after the other.

“Diving In A Sea Of Light,” if you can believe this, is the most ambitious Secret Friend video yet! Fox enlisted “Do You?” director Micah Buzan once again to create an animated visual that’s not just gorgeous to watch, but also tells an engaging, mindbending tale. The video mixes a healthy dose of mediums, everything from pencil sketches to bold primary colors to psychedelic modern art, and takes the viewer on a journey from a serene evening swim into the depths of nautical craziness. It begins with a man stepping into a quiet cove for a night swim, but he’s soon overtaken by the desire to submerge himself in the wild world beneath the waves. The longer he stays under, the more abstract and hallucinogenic the world becomes.

We’re all very pleased to once again have the opportunity with Secret Friend and the stunning sights and sounds we’ve come to expect. It’s our true belief that this video will surpass anything you’ve seen yet in 2016, so don’t pass this one by! Please contact Andy Gesner and the HIP Video Promo team at (732)-613-1779 or email us at info@HIPVideoPromo.com . You can also visit http://www.SecretFriendMusic.com/ for more info on Secret Friend.