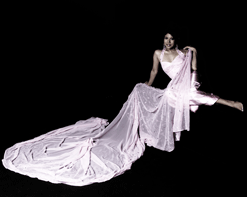 For a number of years, renowned Sri Lanka born, Australia-based singer/songwriter, Senani, has been making considerable waves in the Southern Hemisphere and is now determined to share her wonderfully fresh sound with the rest of the world. Heavily influenced by R&B, neo-soul and the traditional South Asian/Indian music that she grew up listening to, Senani has managed to fuse all three styles into one delightfully addictive sound that is all her own. The sexy new music video for her fresh and soulful single, “Free,” is a perfect introduction to those who haven’t been lucky enough to discover Senani yet.

As well as achieving airplay Down Under, “Free” has been recently nominated for the Hollywood Music in Media Awards in the R&B Soul Category for 2013 and Senani will be attending the red carpet, televised ceremony on November 21st at the Fonda Theatre in Hollywood.

Unabashed about and completely receptive to the deep spirituality that lies at the core of her emergence as a recording artist, Senani is, in every possible way, all about soul, and knows how to write music that touches us at our core. Inspired by highly rhythmic and intricate Indian music, with melodies and scales that complement each other perfectly, to set her apart from other artists, she channels her roots as her secret weapon. “My mom (a well known actress, singer and dancer in Sri Lanka in the ‘60s and ‘70s) used a lot of native instruments, and I grew up listening to her singing and performing, so they are part of my collective musical memory,” says Senani.

“Free” is all about freedom, being unrestricted to be who you want to be, unlimited, forgoing the roles society wants us to play,” she says. “It challenges us to break the barriers and social norms including our ideas about marriage, jobs, the way the system is run and gender roles.” The stunning Daniel Coolahan-directed video for her new single represents an abandonment of social norms and running free (symbolized metaphorically) with nature along the coastal line of the great ocean road in Australia. Lyrically and musically, it gives the listener a taste of freedom from the other side.

Having won several high-profile music competitions, performed at a number of reputable Australian music festivals and one national TV appearance, secured a ton radio airplay, and had her previous music video for her popular song, “Voodoo Girl,” garner a ton of love at MTV India (as well as 30,000+ views on YouTube), Senani is a shining example of hard work paying off.

For information on Senani’s video for “Free” or her critically acclaimed new album, Infinity, please contact Andy Gesner and the HIP Video Promo staff at (732)-613-1779 or email us at info@HIPVideoPromo.com . You can also visit www.Senani.com for more info.