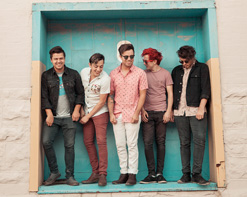 When we were kids, everyone continuously told us to follow our dreams. We were told to be true to ourselves and disregard the non-believers. But as soon as we’re thrusted into “adult” life, we are suddenly roughed up by institutions in an attempt to strip us of everything we were taught, and buy into the cookie-cutter life of the incessantly mundane. Austin, Texas’, Shadow of Whales is an Indie-Pop band with every intention of breaking the mold and inspiring others to carve their own path. Their new single, “Runaway” is the rebel anthem for this generation’s fight for individual freedom.

Shadow of Whales was created when lead singer, Joshua Flores coralled friends from the music scene who had all gone in seperate directions. Lost in the raging waters of early 20-something-hood, Jeremy Boyum, Chris Fraga, JD Vasquez, and Caleb Flores were offered a life-saver. They were given a chance to make their way to new shores, and they’ve taken the opportunity with a feverish passion that is impossible not to root for. In 2014, the band released their debut single, “Dream”. This song detailed their plans to set sail for a new world where they are the captains of their own destiny. Their newest single, “Runaway” is featured on the ‘What We Do’ EP, the righteous follow-up to “Dream”. “Runaway” takes the idealism of “Dream” and turns it into tangible reality where actions certainly speak louder than words.

Along with the sonic mastery of “Runaway”, the gleaming official music video follows suite. The video hones in on the life of a female protagonist named Jane. She, like many young and rambunctious souls, is not happy with where she is in life. She is shown to have multiple anchors holding her down, and in her boiling frustration, she evaluates herself and realizes she needs to make a change. She makes the decision to leave home and join Shadow of Whales on tour, where she learns valuable lessons about herself and the world around her. The video reaches a dramatic climax where Jane lights a flare, symbolizing facing her demons and taking control of her life. With such an accessible, yet original sound and one of the most inspirational videos of the year, Shadow of Whales are sure to make waves and garner the support of devoted “Runaways” around the world to follow their journey to freedom.

It’s our profound pleasure to be teaming up with a band as inspirational as Shadow of Whales to bring you the “Runaway” music video and to see it included in your regular programming would make our day, our week and our month! We are absolutely flying high to be bringing this video to you and rest assured we’ll have plenty of outstanding Shadow of Whales merch to set up online/on-air contests and giveaways throughout the campaign. Don’t hesitate to let us know what we can do on our end to make that happen. Please contact Andy Gesner and the HIP Video Promo team at (732)-613-1779, email us at info@HIPVideoPromo.com or visit www.WhoIsSOW.com for more info on Shadow of Whales.