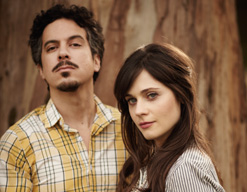 Hey everybody, it’s Andy Gesner and the staff from HIP Video Promo bringing a little early sunshine to your season. Midway through the clip for “In The Sun”, Zooey Deschanel turns to her dance partner and gives him a gigantic, enthusiastic smile. He beams right back at her. Not only is this thoroughly believable — who wouldn’t be thrilled to dance with Zooey Deschanel? — it’s also a surprisingly engaging gesture. Most music video choreographers casts the dancers as little more than scenery; they’re supporting cast and added color, and the star certainly doesn’t bother to interact with them, or even acknowledge them. She & Him, by contrast, is a famously generous act, and that’s apparent in everything they do.

And maybe that helps to explain why fans and critics alike love them right back. Few 2010 albums are as gleefully anticipated as the folk-pop duo’s Volume Two, the sequel to a debut that won the hearts of listeners worldwide. Volume One was named the best album of 2008 by Paste Magazine, won plaudits in publications from Pitchfork toRolling Stone, and even nudged its way onto the mainstream Billboardcharts. The set was hailed for Deschanel’s strong, empathetic songwriting, M. Ward’s imaginative arrangements and superb musicianship, and a few cleverly-chosen covers, too, including a cinematic reading of the Lennon/McCartney standard “I Should Have Known Better”.

Volume Two promises more of what made the first She & Him set so endearing — and a few additional twists, too. Deschanel’s warmly-romantic songs still evoke early-Seventies AM California classics, and M. Ward’s guitar remains honey-sweet. This time, the cover choices are even more adventurous: Skeeter Davis’s perennial “Gonna Get Along Without You Now” and NRBQ’s wistful “Ridin’ In My Car” are interpreted beautifully. “In The Sun”, the lead single, features the members of Tilly & The Wall on backing vocals; their enthusiasm and flexibility is a perfect match for She & Him’s radiant sound.

The clip for “In The Sun” takes Deschanel and Ward — and the viewer — back to schooldays. Indeed, the dynamic will be familiar to anybody who has ever been in a classroom: she’s doing whatever she can to capture his attention, and he’s intent on ignoring her overtures. All of the typical sights of suburban high schools are captured here — the bright orange lockers, the drab and poorly-stocked library, the rows of uncomfortable-looking wooden chairs, the lacquered parquet floor of the gymnasium. But Zooey Deschanel (and a troupe of friends) brings the setting alive with a dance routine that’s irresistibly charming, and almost impossibly flirty. Deschanel may be the most winsome frontwoman in contemporary pop, and in early 2010 we can’t think of anybody we’d rather watch on video. Her filmography is an impressive one, and we couldn’t be more thrilled that she’s decided to apply her remarkable screen talents to music video.

We are all very pleased to be working with our good friends at Merge Records to bring you this hotly anticipated clip. If you need more info, call Andy Gesner at 732-613-1779 or e-mail us at info@HIPVideoPromo.com . You can also visit www.MergeRecords.com or www.SheAndHim.com to find out more about She & Him.