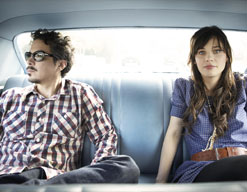 Here at HIP, we’re suckers for boy-girl musical pairings who perfectly play off of one another’s strengths, and no group does it quite as well as She & Him. At this point, you’re more than familiar with this dynamic duo. Music extraordinaire M. Ward and flawless songstress/actress Zooey Deschanel have already had such a successful year, and their video for “In The Sun” performed impressively on the programming circuit just a few months ago. With that video still fresh in your minds, prepare for a different taste of the band with their video for “Thieves.”

Strip away the color and pep from the “In The Sun” video and replace the high school setting with the atmosphere of a vintage 1920s-style silent film. That’s what you’ve got with the “Thieves” video, which chronicles a tale of disconnected romance between adult and kid versions of Deschanel and M. Ward. She & Him’s different versions of themselves transcend the barrier of space and time in order to send messages to each other in an attempt to reconnect. Between the kid versions playing telephone to the older Deschanel following a treasure map to find her long, lost love, what starts off as a somber story results in quite a charming tale.

Even with the saddest songs, Deschanel remains endearing with her dreamlike, ethereal voice. M. Ward knows just how to match her with his meticulous arrangements, so it’s no wonder these two work so well together. It’s easy to see that the video provides for a classic visual interpretation of “Thieves,” where Deschanel repeats over and over, “And I know and you know this too that a love like ours is terrible news.”

“Thieves” is just the second serving from She & Him’s latest album, Volume II. The pair’s second album has been received with great praise since its release, in which Rolling Stone noted, “It’s the sunniest, sad record you’ll hear all year – pretty love songs set in a ‘nation’ where the summer never ends.” Volume II continues to chart on Billboard, debuting at No. 6 on the Billboard 200 and nabbing the No. 1 spot on the Rock, Independent, Folk, Alternative and Digital Albums charts.

In terms of the video for “Thieves,” it has already had a huge debut on Pitchfork.com back in early July, resulting in some secured early buzz for She & Him. This is a bandwagon you won’t want to miss out in joining, and we thank the crew over at Merge Records for bringing us another unmistakable She & Him clip. If you need more info, call Andy Gesner at 732-613-1779 or e-mail us at info@HIPVideoPromo.com . You can also visit www.SheandHim.com and www.MergeRecords.com to find out more about She & Him.

For info about She & Him’s “In The Sun” video, click HERE