The Shins “Past And Pending” 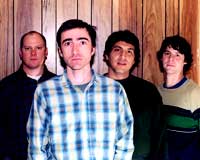 One of the greatest thrills for us at HIP Video Promo in 2002 was the chance to work with Seattle’s tenacious Sub Pop Records. Unafraid to take a chance on up and comers with what most industry folk would claim to have little commercial appeal, Sub Pop have released over 600 records in 15 years and (though the rumors of their demise have been greatly exaggerated) continue to release the most impactful, cutting edge indie rock out there. Take The Shins for instance….Hailing from Albuquerque, New Mexico, they are the real deal: a musical miracle coming out of the Great Southwest with members who were very moved by the early nineties Northwest Grunge Invasion. This was the very same invasion orchestrated by Sub Pop with the success of Nirvana and Mudhoney, amongst others.

Some sage or other once said that all of life is a journey. Assuming that’s true, The Shins’ “The Past and Pending” is a song, and a video, about life. The trek from the hinterlands to the big city, looking for a better life; or even the progress of human civilization itself; can be found reflected in microcosm in this clever and artful video. The video emphasizes the romantic notions of “Road Trips” and the need for them to be chronicled for future generations. Accompanied by a quiet, unassuming father figure, the driver/photographer visits (or perhaps revisits) the past, with his antique Polaroid close at hand. The clip is complete with pastoral imagery and expansive landscapes that give way to urban scenery and ribbons of highway. With an uncanny ability to combine a post-punk aesthetic with traditional pop ethos, The Shins have offered us a melodic, thoughtful, and tastefully understated depiction of a young man’s coming of age.

The Shins debut full length Oh, Inverted World calls to mind obvious musical influences like Modest Mouse and Built to Spill. But “The Past and Pending” (the last cut on the CD) is more reminiscent of The Moody Blues at their tuneful best and least annoyingly pretentious — the minimal percussion, the triumphant French horn, and the Renaissance modalities are used to telling effect. Classical echoes aside, “The Past and Pending” is also a celebration of all that’s great about America. This is what “Route 66” would have looked like if it was written by William Shakespeare. The Shins have been on their own ten year musical journey, and this clip is a thoughtful and, one inevitably believes, faithful record of it. Like the great prophets, they have come out of the desert with wisdom.

Huge thanks to Megan Jasper and all the neat indie rock music lovers at Sub Pop Records for bringing HIP Video in to help promote this beautifully shot video. To get programmers excited, we are running the “Sub Pop Spring Fling” contest. Any programmer that adds The Shins video for the add dates of March 21st and 24th will be entered into a drawing to win a “twelve pack” of their favorite Sub Pop releases. With a catalog as large as Sub Pop’s, it will be easy for the winner to find great CDs to add to their collection. The drawing takes place on April 30th. If you need more info call Andy Gesner at 732-613-1779 or e-mail info@HIPVideoPromo.com .