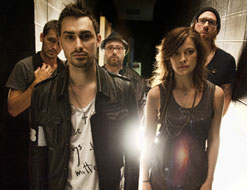 Hello programming friends, it’s Andy Gesner and the HIP Video Promo staff with a brand new clip from one of the most promising upcoming acts this year! It seems that Europe has been mocking our great nation, delivering one solid new rock group after another, laughing at our lack of young guitar heroes, and rubbing our faces in our own pile of worthless empty radio pop. But we will take no more! Finally, we’ve been graced with a group that makes the other bands on their level look like child’s play. Ladies and gentlemen of the programming world, we tremble with excitement as we introduce you to the future global arena stars waving our stars and stripes, SHIROCK. There is no doubt in our mind that Nashville darlings SHIROCK and their music video for “New Solution” will simply knock you off your seat, while snatching up every bit of your heart and soul, never to give it back.

Could it be that a band can actually win you over in a matter of 3 minutes? The answer is a loud and resonating yes! The music video for “New Solution” is what every “up and coming” rock group strives for and never actually accomplishes until much later in their career. Taking hints from their inspirations, SHIROCK’s video is a performance clip filmed live on location of one of their packed concerts. However, the lights and editing behind this video make even some of the most polished set-filmed music videos a run for their money and dignity. The video takes cues from classic live music video hybrids like Coldplay’s “Fix You,” featuring the album version of the song with traces of live performance and cheering fans sprinkled throughout. SHIROCK knows that rockstars are made in lights, LEDs, heavy fog, and countless cheering fans, which is precisely what this clip is packed with to the brim. What’s more is that all those blazing bulbs cannot outshine the stage presence of this dazzling quintet, as they effortlessly master their crowd and their craft.

SHIROCK’s youthful and energetic glitz and glamour is well rounded by their well developed sound. The band channels the anthemic openness of bands like U2 and 30 Seconds To Mars, while laying it over an upbeat and pop friendly polish. The dual vocals of the fetching frontman Chuck SHIROCK and his titillating female sidekick and keyboardist Pap exhibit massive range and seasoned tone as they deliver the instantly memorable hooks. It is exactly this combustive chemistry that sets this band apart from their contemporaries.

The band has recently released their dynamic debut album, Everything Burns, produced by Jay Ruston, who has also worked with The Donnas, Everclear, Matisyahu, and Cold War Kids, is filled to boot with bold, anthemic songs that bristle with restless urgency and passionate optimism. The release has sent the band on several successful support tours throughout the nation and earned them spotlights and features by Cosmo Girl and Delta Airlines. SHIROCK’s songs have also been highlighted on ABC’s television show Brothers and Sisters, NBC’s ER, as well as MTV’s The Hills. In addition, SHIROCK has been using their success to fuel a non-profit organization under the same name as their album in order to raise money for various charities and inspire their fans to act out on various causes. The band has also launched a rapid selling clothing line called Irock Clothing which has already been adopted into several boutiques regionally.

We are absolutely thrilled to bring you a band that deserves all the attention they’re getting and much more. The folks over in the SHIROCK camp have provided us with lots of copies of Everything Burns for your listening pleasure and on-air giveaway needs. If you need more info, call Andy Gesner at 732-613-1779 or e-mail us at info@HIPVideoPromo.com . You can also visitwww.TheMovementGroup.com or www.SHIROCK.net to find out more about SHIROCK.