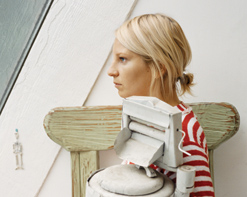 Greetings friends! It’s Andy Gesner and the staff from HIP Video Promo, back with another entertaining clip from an established international voice who Americans in substantial numbers are beginning to notice. Sia Furler has written songs with Beck, placed a cover of “Paranoid Android” on the acclaimed Radiohead tribute albumExit Music, and recorded two major-label sets for European audiences. In her native Australia, she’s a star – both for the trailblazing fusion of jazz, electro, and contemporary pop solo albums, and her remarkable vocal work for the synth-pop band Zero 7.

Nonetheless, Sia’s albums didn’t get their stateside release until 2006. By then, millions of Americans had already heard her sing without knowing it: her single “Breathe Me” closed the finale episode of HBO’s acclaimed Six Feet Under. After that, it seemed like every U.S. television program wanted a Sia song – Grey’s Anatomy used “Sunday”, “Breathe Me” turned up in The Hills, a remixed Sia track landed in Veronica Mars. Even her Radiohead interpretation scored an episode of The O.C. Sia’s voice – warm, breathy, intimate, a carrier of secret longing – is a perfect vehicle for cinematic expression. Demand for her performances (and a cross-promotion with Six Feet Under) brought her to America for a string of remarkable shows.Lady Croissant, her latest release, is a document of that tour. The mini-LP was recorded live at the Bowery Ballroom in New York City, and chronicles the intoxicating effect her voice has over audiences.

Lady Croissant reprises the well-known Sia songs: a radiant version of “Breathe Me” is here, as are several numbers made internationally famous by Zero 7. But she’s also included a new studio recording – and one that shows off a different side of the singer. “Pictures” isn’t exactly lighthearted, but it’s not downtempo, either: this could be a particularly challenging American Top-40 number. Before gliding into an expansive chorus, the song bounces along on a piano and drum groove that’s pure classic pop. Throughout, Sia wraps her supple voice around a gorgeous, lilting melody: teasing, cajoling, purring into the microphone, beckoning the listener closer.

The “Pictures” clip further establishes Sia’s quirky sense of humor. The singer co-stars in the video: she plays the object of the main character’s affection. They’ve broken up, and he’s hung up on her – though the song advises him to “take her down from the wall”, he can’t bring himself to remove her portrait. The story is told through a series of flashbacks, each signaled by sitcom-style ripples in the picture (reverberations in the well of memory). Many are intentionally exaggerated – the poor protagonist is shown reading Men Are From Mars, Women Are From Venus – and Sia herself turns in a winningly over-the-top performance as the estranged girlfriend. Crying in the car or kissing her beau on the dancefloor, she channels her inner ingénue effortlessly. Shot in bright color on the streets of suburban Los Angeles, the “Pictures” clip presents Sia Furler as an altogether American sort of Aussie singer: a transatlantic pop siren and a natural for stateside audiences.

It is our greatest pleasure to be working with Justin Nichols and all of the fine people at Astralwerks to bring you this exquisite new video. Justin has also been kind enough to hook us up with a plethora of Lady Croissant CDs for all of your on-air giveaway needs, so don’t hesitate to be in touch if you’d like to get your hands on some! For more info, you can e-mail info@HIPVideoPromo.com  or call Andy Gesner at 732 613-1779. You can also visit www.Astralwerks.com, or www.SiaMusic.net to find more information about Sia.