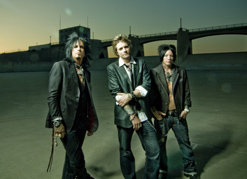 Hey friends, it’s Andy Gesner and the staff from HIP Video Promo back with another must see clip! When Nikki Sixx first assembled his Sixx: A.M. project, it wasn’t national tours and festival-sized crowds he was thinking about. The veteran hard-rock songwriter and bassist wanted something a little more personal: powerful musical interpretations of the ideas elaborated in The Heroin Diaries, his autobiographical account of the chaotic mid-Eighties arena-metal scene. And that he most certainly got – The Heroin Diaries Soundtrack is a bracing, fascinating, brutally-honest album. If Nikki Sixx had made this record and never toured to support it, it would still be remembered as a testament to his candor, his unflagging energy, and his perennially sharp, observant songwriting.

But Nikki Sixx is nothing if not a product of Los Angeles’s famously theatrical Strip – his best friends and musical associates are all dynamic stage performers. The Mötley Crüe bassist chose to work with terrific live musicians on The Heroin Diaries. Guitarist DJ Ashba and singer James Michael are both L.A. rock royalty – they’ve been playing in popular Crüe-inspired metal bands for more than a decade (Scott Stevens of the Exies – no stranger to the stagelights himself – contributed several of the album’s explosive drum tracks). Once lead Sixx: A.M. single “Life Is Beautiful” hit the Billboard charts, listeners began to ask: when will we be able to see these legendary musicians in concert?

It’s no great exaggeration to call this demand the motivation behind this year’s wildly-successful 41-city Crüe Fest tour. Nikki Sixx recognized that his legion of hardcore fans wanted to see both his bands – his world-famous outfit and his brand-new combo. Never short of stamina, Sixx decided to pull double-duty, and Sixx: A.M. has joined Mötley Crüe, Buckcherry, Papa Roach, and Trapt on the loudest rock tour of the summer. The Crüe Fest has been rocking arenas across the North American continent, and plans are in the works to bring the mayhem to the other side of the Atlantic. And while there’s no doubt that Nikki Sixx’s old band is the star attraction at the Fest, Sixx: A.M. has proven to be a sturdy and enthusiastically-received undercard. In fact, the line between Sixx: A.M. and the Crüe isn’t always so easy to draw these days: Sixx, DJ Ashba, and James Michael wrote much of the music on Saints Of Los Angeles, including the hit title track.

For a hard rock clip, the “Life Is Beautiful” video was introspective – a look at the pages of a whisky-soaked diary. The “Tomorrow” video, by contrast, celebrates Sixx: A.M.’s transformation into a formidable live act. Here we see the quartet in full glory, performing on giant outdoor stages in front of thousands of adoring fans. James Michael fully inhabits Nikki Sixx’s story of regret and redemption, and when he reaches the fist-pumping chorus, he’s got the whole arena cheering along. It’s an incontrovertible fact of contemporary rock – wherever Nikki Sixx goes, huge and enthusiastic crowds are sure to follow.

Thanks again to Frank and Sam at Eleven Seven Music for bringing us on board for this video and also hooking us up with plenty of copies of The Heroin Diaries for your on-air giveaways. Hit us up if you’d like to get your hands on some copies! If you need more info, call Andy Gesner at 732-613-1779 or e-mail us at info@HIPVideoPromo.com. You can also visitwww.ElevenSeven.net or www.SixxAMmusic.com to find out more about Sixx: A.M.