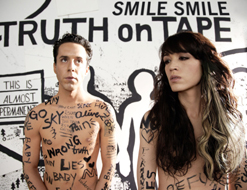 Greetings, everybody, it’s Andy Gesner from HIP Video Promo, here to help spread the word about a Texas pop duo with irresistible charm. It would be completely inaccurate to imply that Smile Smile lacks a national profile: their songs have aired on MTV’s dating show NEXT, and they were featured in the cult Freddie Prinze/Taryn Manning comedy Jack and Jill vs the World. They’ve taken their act to stages all over the country, earned a nomination for best folk-rock song at the Los Angeles Independent Music Awards, and another for Best American Act at the Toronto Independent Music Awards. Next month, they’ll be headlining a three-night stand at New York’s legendary Living Room — and hitting the road with Bob Schneider for a swing through California — before returning home in time for SxSW. Thanks in part to the band’s attractive website and substantial following on Twitter and other social-networking sites, Smile Smile enthusiasts are everywhere.

That said, there’s no denying that those fans are concentrated in Smile Smile’s hometown of Dallas, where guitarist/singer Ryan Hamilton and pianist/singer Jencey Hirunrusme are considered underground celebrities and rock royalty. Longtime favorites of the Dallas mainstream press — the Observer has praised their “brilliantly unconventional songwriting and smart harmonies” — the duo have established themselves as one of the city’s most consistently entertaining bands. And as so frequently happens in tightly-knit independent-music scenes, the personal lives of the principal characters become public. Dallas music listeners know that Hamilton and Hirunrusme were once a couple; they also know that despite a typically ugly breakup, they continue to harmonize beautifully onstage. Perhaps acknowledging that there was no ducking their story, Smile Smile has decided instead to embrace it. Truth On Tape, their upcoming full-length, is a brutally-honest examination of a relationship in disarray, sung from the perspectives of two young lovers with the best intentions — and a propensity for making the worst mistakes. Candid and courageous, it’s also remarkably tuneful, catchy, and sonically adventurous. The romantic desolation is real, but Smile Smile always communicates an irreducible sense of hope.

That’s apparent on “Beg You To Stay”, the lead single from the collection. It’s a heartbreaker, but listening to Hamilton and Hirusume in action is an unabashed pleasure: Tripwire compared the voices of the two Smile Smile singers to those of Ryan Adams and Hope Sandoval, and they’ve never sounded more fetching together than they do here. That chemistry is also captured in the “Beg You To Stay” clip. Shot in high-contrast black and white with blood-red accents, “Beg You To Stay” casts Hamilton as an inept magician and Hirusume as his willing — but somewhat caustic — assistant. He attempts to push a pin through a balloon; when it pops, she’s not afraid to laugh at him. When she hops in the box and he begins to saw it in half, the sense of encroaching tragedy is too thick to dispel. Still, they continue to sing, even after the botched “trick” reaches its inevitable conclusion.

Once again we’re excited to be working with Tami Thomsen and the staff at Kirtland Records to deliver this clip to you. Smile Smile will be playing select dates on both East and West Coasts in February, so don’t hesitate to be in touch for a video interview or for tickets to shows. If you need more info, call Andy Gesner at 732-613-1779 or e-mail us at info@HIPVideoPromo.com. You can also visit www.KirtlandRecords.com or www.SmileSmileMusic.com to find out more about Smile Smile.