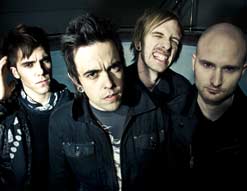 Greetings fellow rock and roll lovers, it’s Andy Gesner and the staff from HIP Video Promo, here to let you know all about a new clip from a gang of true believers with an earth-shaking sound. Social Code calls their latest album Rock ‘N’ Roll, and if that sounds audacious to you, trust us: there’s nothing immodest or ironic about the handle. These five Canadian musicians know the power of the backbeat and the scalding six-string riff; they’re wedded to indelible verses and electrifying, sexy, sweaty, roof-raising choruses. They make music that’s sufficiently traditionalist to remind you of your mid-Seventies classic favorites, and contemporary enough to fit in on a modern radio playlist. Frontman and founding member Travis Nesbitt is a huge presence on the microphone, spinning out stories of lust, breakups, desperation, and long nights. At thirty-six minutes, Rock ‘N’ Roll is a sleek, economical, no-bull set that goes straight for the gut; it’s a bracing ride, and it more than lives up to its promising title.

North of the border, rock fans already know this combo well. Their debut, the energetic A Day At The Movies, turned heads all over Canada; the eponymous follow-up spawned “Bomb Hands”, the band’s first international single. “He Said She Said”, a pivotal cut on Social Code, earned the band a nomination for Outstanding Rock Record of the Year at the Western Canada Music Awards, selling over 50,000 copies in their native country. They’ve toured with Buckcherry, Shinedown, Theory Of A Deadman, and Three Days Grace (among others), and shared stages with a variety of bands,; from Fall Out Boy, to Rise Against, Sum 41, and many more. With Rock ‘N’ Roll, Social Code looks poised to build on their achievements and extend their dominion to America — and “Satisfied” is the song that’s bound to get it done. It’s already climbing the stateside rock charts (up over 20 positions in just over two weeks); meanwhile, back home in Canada, it’s Top 15…and has been for 20+ weeks and counting.

If you’re a fan of the rock (and why wouldn’t you be?) you’re going to find it tough to resist. Produced by John Travis (Kid Rock, Sugar Ray) and mixed by Mike Fraser (AC/DC, Aerosmith), it’s got that piledriver crunch associated with all of the most undeniable classic rock recordings. Over a grinding guitar riff, Travis Nesbitt sings of a woman whose appetite for quick sexual conquests is insatiable; it’s a traditional rock and roll topic, and the Social Code frontman inhabits the character with ease. In pre-release interviews, Social Code has discussed their admiration for Led Zep, Cheap Trick, and the Stones; with “Satisfied”, they’ve made a record that would make any of their influences proud.

The band’s taste for time-tested rock iconography extends to their videos: the “Satisfied” clip opens with a shot of the band framed between the legs of a beautiful woman. She sticks around, too — as the group plays, she gyrates suggestively for the camera. Sexy for sure, but Social Code is an electrifying live band, and their concerts often double as wild parties (they’re even giving away “Satisfied”-themed condoms to accompany the release of the single!) Fans at Social Code concerts often discover that they’re phenomenal interpreters, too: their dynamic covers of Journey’s “Lights” and Icicle Works’s new wave standard “Birds Fly (Whisper To A Scream)” are worth hunting down. Here, they’re shooting for a classic of their own — buzzing like engines in overdrive, keeping it pure, and pouring it on.

We’re very excited to be working in tandem with the folks at both Fifth Season Music and Land Shark Promotion to bring you this salacious new clip. If you need more info, call Andy Gesner at 732-613-1779 or e-mail us at info@HIPVideoPromo.com.