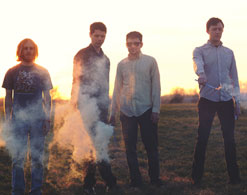 Hello programmers! It’s Andy Gesner and the HIP Video Promo staff with a video that will drag you through the streets (and swimming pools) of suburbia, tied to a rope by your feet! Well not you, it’s really the members of influential indie pop outfit Someone Still Loves You Boris Yeltsin that are being violently dragged along pavements, yards, pools, and other not-so-pleasant surfaces in their exciting new clip for “Critical Drain.”

Someone Still Loves You Boris Yeltsin have released three full-length albums since 2005. “Critical Drain” is the newest single form their magnificent 2010 release Let It Sway, which has gathered a massive amount of steam over the course of a year since its unveiling last August. The record received raving reviews fromStereogum and Pitchfork, whose great review mentions that on this album, the band is “done fucking around in the minor leagues.”Consequence of Sound have also fallen in love with the album, saying that “the songs definitely made me tap my toes and sway my head.” The record has also earned solid accolades from solid Paste Magazine and NME. Let It Sway was produced by Death Cab for Cutie member/super producer Chris Walla and continues their tradition of writing catchy songs. In addition to the press hype generated by the record, Someone Still Loves You Boris Yeltsin are releasing a treasure chest of the best 26 tracks from over 100 other singles/EPs/non-album songs that have surfaced in between their full-length records for their new collection album entitledTape Club October 18th. The band will be on tour across the United States throughout the fall in support of “Critical Drain” and Tape Club.

“Critical Drain” is fast paced one-two punch in the face indie pop song, sporting a double-time cowpunk arrangement over catchy vocal melodies. The track bundles the swiftness of punk rock with the lighter side of indie rock, combining elements that made bands like Tokyo Police Club and Cage The Elephant new staples of the genre. The music video takes a hint from the song’s urgency and literally drags the band members across a suburban town. While the idea behind the video is made possible by very clever special effects, don’t question the authenticity of the band’s physical involvement as they are eventually actually dragged through swimming pools and paint. It’s a prime example of a group that suffers for their art in more ways than one!

We are constantly impressed by how Someone Still Loves You Boris Yeltsin continue to reinvent themselves within the music video realm and are certain you will be as well, when you get a chance to see this cool clip. We’re thrilled to bring yet another single from SSLYBY’s awesome Let It Sway and thank the folks over at Polyvinyl Record Co. for handing us another shining work of video magic. If you need more info, call Andy Gesner at 732-613-1779 or e-mail us at info@HIPVideoPromo.com. You can also visit www.PolyvinylRecords.com or www.SSLYBY.com to get more info on Someone Still Loves You Boris Yeltsin and see the tour dates near you.

For info about Someone Still Loves You Boris Yeltsin’s video, “Sink/Let It Sway” click HERE