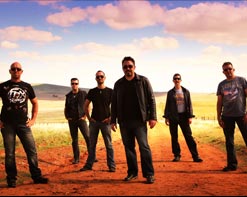 Australia’s Sonic Divide began as a chance encounter between guitarist Glenn Johnson and lead singer Wayne Holden years ago. What originally started out as a recreational activity between friends quickly morphed into a full-blown rock and roll project when each member began contributing their own material. From their debut self-titled album we are proud to present to you the new video for “I Wonder.”

Upon ramping up their writing of original music, the band caught the attention of well known Adelaide producer/engineer Darren Mullan who brought the band into the studio to record their debut album. Under Darren’s expert guidance the band crafted an album of soaring guitars, keyboards, and multilayered vocals that unleashes a rich tapestry that blurs the lines between the various “rock” sub-genres. Perhaps none of the songs capture this sound that has been likened to 3 Doors Down, Muse, and Bon Jovi better than the new single for “I Wonder.”

For the “I Wonder” video the band spent 2 days filming on a farming property north of Adelaide in Burra, South Australia. It is a harsh and barren climate, with little signs of life. That’s where Sonic Divide comes in. With Wayne Holden leading the pack the band heads down the dusty road, passing various trinkets, pieces of furniture, and even a cottage that any fan of Midnight Oil would recognize from the Diesel & Dust album cover! Most importantly the band finds the instruments they need to strap up and rock out the infectious hooks of “I Wonder.” The slow motion movement of the song lends itself to the soothing nature of the song, but their determination never ceases to propel the song and video forward!

We are very pleased to be working with this new musical explosion from Australia. We would love for you to include the video in your programming, so please don’t hesitate to get in touch and let us know what you need to make that happen! For more information please contact Andy Gesner and the crew at HIP Video Promo at (732)-613-1779 or email us at info@HIPVideoPromo.com . You can also visit www.SonicDivide.net/ for more info.