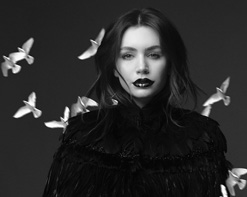 Sophie Simmons puts intensive work and dedication into everything she does, turning anything she touches into gold. The now 25-year old got her start in the spotlight at the age of 11 as a star on the hit reality TV show, Gene Simmons: Family Jewels. Since then, she has used her position to advance her career in acting. In that time she also acquired a love for giving back, so she founded her very own Vancouver, BC based center for abused children called Sophie’s Place. With this impressive resume behind her, she has her eyes set on her burgeoning singing career, kicking off with her new alt-pop smash, “Black Mirror”.

In her own words, Simmons states, “The song is about love, self-sabotage and our attachment to technology.” She was struck by inspiration from one of her favorite shows with the same title, Black Mirror in a period when her relationship was in turmoil. The song’s lyrical makeup details this fusion of influence. The chorus hits the nail on the head as she belts lines like, “I’ve been chewed up and spit out and trampled on / But I like it, the taste of a love gone wrong / Always waiting, this feeling inside my bones / I’ll be starin’ ’till something lights up my phone, Black Mirror.” Although the song’s framework falls into a pop structure, there are many aspects of the production that are beating against those walls in rebellion, creating a decidedly darker sonic hue. An ever-relatable tale told through a contemporary lens, “Black Mirror” is sure to connect with pop fans worldwide on a visceral level.

The accompanying music video is yet another example of Sophie Simmons taking the road less traveled. Shot like a 90’s home video, but with Hollywood precision, the VHS grain offers a deep nostalgia for love lost, bound to tug on the heart strings of viewers. Simmons is followed through her yearning to be taken back to the time when her love would play on her emotions time and time again, a feeling she became addicted to. She sits alone on the floor in the darkness, wistfully dreaming of their souls colliding one last time.