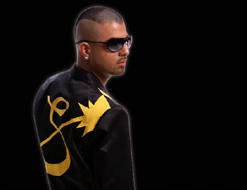 Hello music lovers, it’s Andy Gesner and the staff from HIP Video Promo, here with a pair of clips from a talented new artist with an international following. They’re both eminently replayable and worthy of your engagement, but we ask you to turn your attention to “Make It Hot” first – it’s the best introduction possible to SPACE’s multifaceted sound. Besides, we know for sure that the artist wants to begin by getting you moving; the reflective stuff can happen after you’re exhausted from dancing.

It might surprise you to learn that the exceedingly funky SPACE hails from Sweden. Then again, artists like Kissey Asplund and Lykke Li are making it clear that the old stereotype is outdated: Scandinavia is no longer just the home of tweepop and black metal, but a hotbed of creative urban music as well. Gothenburg – SPACE’s home city and the second-largest in the country – is particularly known for its cutting-edge club scene. In this context, SPACE’s sizzling hybrid of Eurodisco, American dance music, hip-hop, and international R&B makes perfect sense. From the top of the world, SPACE has crafted a sound familiar enough to play anywhere.

But there’s no denying that he loves America – and that America is poised to love him right back. He’s spent plenty of time stateside, too: he’s performed at the Broadway Dance Center, and he’s made recordings in NYC with Chaka Khan and Paul Simon sideman Russell Graham. These trips to Manhattan have built SPACE a substantial U.S. following, and, with the international release of “Make It Hot”, he’s well-positioned to take advantage of the enthusiasm. The song is a straight-up Usher-style burner: big beat, propulsive bass, synthesizer-string stabs, and a smoldering, sexually-suggestive performance from the entertainer himself. He sings, he raps, he produces the tracks, he programs the beats – and as he proves in the “Make It Hot” video, he’s his own lead dancer, too.

The clip for “Make It Hot” is shot in the club; beautiful people abound, but here, SPACE is the main attraction and the focus of everybody’s gaze. In his sunglasses, black and gold sport-jacket, and “microphone” necklace, he looks the part of the classic R&B star. The other attendees at the club are eye-catching, too: girls with wild-colored hair, revealing dresses and miniskirts, and provocative moves. The camera is constantly in motion; it swirls around the dancers, jumps from body to body, crossfades from image to image. From time to time, SPACE splits the screen and blurs the corners of the frame. It’s all meant to recreate the giddy freedom of the club, and to emphasize the artist’s mastery of the milieu.

But there’s more to SPACE than just hot club tracks. He can croon a sensitive ballad, too, and his “Momma You Are My Miracle” is bound to resonate with anybody raised by a single parent. In the “Momma” clip, SPACE sits at the foot of his bed, eyes downcast, singing to the camera. In flashbacks, his mother is shown: painting, smiling, handing the young artist a crystal globe. It’s a moving clip, and testament to the uncommon depth of SPACE’s pop vision.