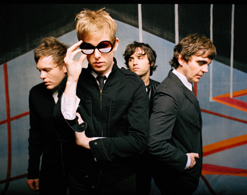 Summer salutations fellow music video lovers, it’s Andy Gesner and the staff at HIP Video Promo with a new clip we are bursting with excitement to be servicing to you. Here at HIP we love sharing videos with you and spreading the word about new music, but we’re rock fans first – and every now and then, we like to imagine that it’s twenty years in the future and we’re looking back on the ‘00s. With that kind of hindsight, who from this contemporary era of rock songwriters will be considered epochal, influential, classic? And whenever we play this game, one name always comes up: Britt Daniel and Spoon. Hell, you could argue that he’s there already – that the five Spoon albums are invariably considered among the best, most original, and most innovative sets released in the past ten years. Certainly Daniel’s outfit has been one of indie rock’s most imitated: you can hear Spoon’s influence in many of the best-loved albums of the year so far (a fact hardly disputed or disguised by any of the grateful artists who’ve made those albums.) No wonder, then, that rock critics no longer liken Daniel and Spoon to contemporary bands, but now compare the act to singers and songwriters who’ve already taken their places in the indie rock pantheon: Joe Strummer, Elvis Costello, Colin Newman, Mark E. Smith, Malkmus, Cobain.

Ga Ga Ga Ga Ga, the group’s sixth full-length, looks poised to build on the commercial and artistic success of Gimme Fiction – an album that topped many critics’ lists of the landmark releases of 2005. “Spoon continues to build one of the most consistent, and distinctive, bodies of work in indie rock”, raved Heather Phares of the All-Music Guide, “the band makes changes and takes chances from album to album, but ends up sounding exactly how Spoon should sound each time.” Gimme Fiction was a darker and heavier album than anything Daniel & Co. had done this decade, but it retained the Stax and Motown elements that made Girls Can Tell and Kill The Moonlight such unusually propulsive (and danceable) indie rock records. Ga Ga Ga Ga Ga promises further innovation; we won’t know for sure until July 10, but lead single “The Underdog” sure suggests that it’ll be another killer set. Producer Jon Brion (Kanye West, Fiona Apple, Aimee Mann), adds a full horn section to the usual Spoon algebra of acoustic guitar, intricate drumming, and imaginative use of alternate percussion. Britt Daniel has one of the most recognizable voices in contemporary music, and here he wraps it around a melodic hook that’s succinct, sharp, and unforgettable

Directed by the Ghost Robot team (Grizzly Bear, Maximo Park, Rachael Yamagata), the clip for “The Underdog” pokes fun at Spoon’s well-earned reputation for thoughtful and meticulous arrangements. Shot in an Austin, Texas studio, the clip imagines “The Underdog” as a live recording sans overdubs – with each of the many rhythm instruments played in real time by percussionists. The core band clusters together in the live room, and Ghost Robot makes sure to get some shots of the commanding Daniel in action. But the camera is restless, and soon it’s turning up musicians behind every door and every gobo, clutching tambourines and shakers, and waiting for the one measure or two when they get to play. A few even look conspicuously bored. The studio bathroom doubles as an isolation booth, and the horn section – dressed like mariachis – play together behind a backlit window. Spoon are such terrific musicians, and Daniel is such a formidable songwriter, that sometimes it’s easy to forget what a terrific sense of humor he has (even about himself and his project!)

We are very proud and honored to be working together with Martin Hall and the tireless staff at Merge Records to bring “The Underdog” video to you and your viewers. They have also been generous enough to hook us up with plenty of copies of Ga Ga Ga Ga Ga for all of your on-air giveaway needs. The band will also be performing select dates this summer in many major markets, so if you’re interested in a video interview, please let us know and we’ll do the rest! If you need more info, call Andy Gesner at 732-613-1779 or e-mail us at info@HIPVideoPromo.com. You can also visit www.MergeRecords.com or www.SpoonTheBand.com to find out more about Spoon.