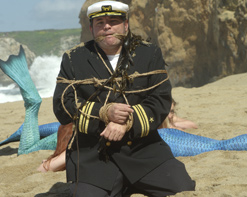 Stormy is the son of a California commercial fisherman and the inspiration of his own near death experiences at sea provide for honest lyrics soaked in raw emotion that splice seamlessly with award winning song-writing. His songs will leave you cast a drift, melodies swimming around inside of your head long after the show is over.

Stormy’s singles have been featured in the “What Rocks” section on the front of the iTunes Music Store and his cover of the Pixies “Where Is My Mind?” continues to net tens of thousands of fans around the world while currently receiving major U.S. terrestrial radio airplay. He’s has worked with #1 hit record producer Chris “Von Pimpenstein” Carter (Bec & Sebastian, Mr. Rally, Christabelle) industry icon Lyle Workman (Frank Black, Sting, Todd Rundgren, Beck), Sean Beavan (Black Veil Brides, Guns N’ Roses, Marilyn Manson, Nine Inch Nails), Tim Narducci (Systematic, Spiral Arms) and Chris Manning (Jellyfish). All of this time rubbing shoulders with industry titans has given Stormy the influences and resources to raise his game to new levels. With the new single for “Holiday,” Stormy Strong presents a single that has more hooks at is disposal than a deep sea angler!

“Holiday” begins like what might be any other day on the Santa Cruz waterfront. Stormy shoring up a gig for the night and going about his business until a rogue banana takes him down with a bang. Why there’s a random banana sitting on the pier is another question, but the damage is done. Flat on his back he drifts away to a dream world where the Stormy Strong gang is rocking out on their own private beach. Before they know it mermaids have come ashore and come to life to join the party. Add in a gorilla (that explains the bananas!) an astronaut, even an Indian sitar guru and you get a fun-filled, action-packed dream world of Stormy Strong. Though it may be fleeting, it is a serene escape from the daily grind!

We’re excited as can be to be working with Stormy Strong and his unique, bombastic approach to the sights and sounds of the indie rock world! With non-stop new content flooding the internet, Stormy Strong is quickly reaching gale force intensity so drop anchor and enjoy the show! We’re here to hook you up with anything you may need to get “Holiday” into your programming, so please contact Andy Gesner and the HIP Video Promo team at (732)-613-1779, email us at info@HIPVideoPromo.com. You can also visit www.StormyStrong.com or www.Facebook.com/StormyStrongMusic for more info on Stormy Strong.