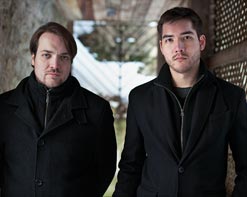 Earlier this year we brought you the “Eureka” video from Canadian artists Strange & Primitive. This claymation masterpiece told the tale of an interstellar space man and his robot creation. The video told the evolving tale of artificial intelligence besting its own creator in both physical and mental might. The video hardly ends on a happy note as the shunned robot returns to the desperate master, but with the knowledge that this story is far from over. With the new video for “Highwayman,” we’re very excited to bring you the next part of the tale.

The video picks up exactly where “Eureka” left off; the robot with a broom in hand. But this time instead of being jettisoned into space the galactic odd couple go on vacation! They roll up to the planet that is home to the race called the Zlogs and in typical disrespectful tourist fashion, the space man gets right to work defacing their sacred monuments. The monument is a golden hot dog, and his love for hot dogs was well established in the “Eureka” video, but it’s unacceptable nonetheless!

A disgraced cyborg cop from the planet sees his shot at redemption and sets out to apprehend the tourists. A chase ensues and once again the space man shows his true colors, hanging the robot out to dry. Soon the robot is dragged before a court of Zlogs and must mount a seemingly impossible defense. We won’t give away what happens next but it’s as equally unpredictable as it is familiar.

Huge kudos to the Strange & Primitive crew for bringing another insanely good video. First “Eureka,” then “Difficulties Be Damned,” and now “Highwayman,” they’re pushing the boundaries of the music video landscape with incredibly rewarding results. Hit us up and let us know what we can do to get this video the programming it truly deserves! You can contact Andy Gesner and the HIP Video Promo crew at (732)-613-1779, email us at info@HIPVideoPromo.com . You can also visit www.StrangeandPrimitive.com for more info on Strange & Primitive.