Street Corner Renaissance “Sh-Boom (Life Could Be A Dream)” 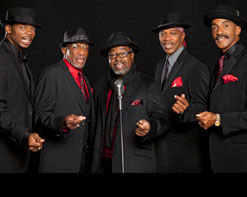 Greetings fellow music lovers, it’s Andy Gesner and the HIP Video Promo staff here in frigid New Jersey bringing you a throwback clip that will surely warm your bones and lift your spirits. We couldn’t think of a more appropriate name than Street Corner Renaissance to describe the sound you will hear from this collection of five gifted and passionate singers. That’s right, we said five singers, relying on nothing but their own God-given voices, and they’re here to reintroduce the sweet sounds of the great doo-wop songs of the 50’s and the 60’s. This time, they bring back a familiar melody in the form of “Sh-boom (Life Could Be A Dream)”, which was originally made famous by both The Crew Cuts and The Chords in 1954. We can only describe this version the same way we think of the original; timeless.

Street Corner Renaissance was born when its founder, Maurice Kitchen, decided that he had sat behind a desk long enough as a successful but frustrated insurance industry claims agent. Seeking out other like-minded individuals, Kitchen banded together a collection of talented singers who had all decided that they had put their dreams off long enough and now was that time to pursue them. Joining forces with Kitchen were Kwame Alexander, Anthony (Tony) Snead, Torre Brannon Reese, and Charles (Sonny) Banks, who between them were everything from a youth advocate, a minister, a legal assistant, and city worker. This is quite an impressive professional resume amongst them, but Kitchen sums it up best about the groups’ decision to pursue their dreams when he said “I just didn’t want to die a claims adjuster. That couldn’t have been the last thing on my resume.”

It wasn’t long before the group found their audience and their sound, covering classic songs from the golden age doo wop in an a Capella style that is second to none. They got their biggest break when they were booked to open the Jazz at Drew Festival, where they shared the stage with such luminaries as Impressions, Lakeside, The Mighty Clouds of Joy, David T. Walker and more. Since then the band has had the well-earned privilege of performing with Chuck Berry, Kool and the Gang and Boyz II Men.

In the video for “Sh-boom (Life Could Be A Dream)”, which also comes from their new album of the same name, Life Could Be A Dream, the guys are seen showcasing their prime asset; their voices! Much like their a Capella approach, this video proves that you don’t need flashy effects, or big lights or a big budget if you can walk the walk and talk the talk. It only seems natural that we see the guys singing in all different settings, whether it be the dressing room, the stage or even just out and about, taking turns delivering soaring impassioned melodies to a low end melody that will leave your belly rumbling. Lest we forget, we should also mention that they also have some nice dance moves as well, feeding off of each other’s energy and vibe throughout the video. All of this just goes to showcase the deep bond between these longtime music lovers and how in tune (pun intended!) they are with each other.

We’re very excited to be working with Street Corner Renaissance and will be working closely with our partner NMAP and Karvin Johnson at KES Music and Distribution to make sure that you have everything you need to get this video included in your programming. We’ve got plenty of copies of Life Could Be A Dream available for all of you on-air giveaway needs, so please don’t hesitate to be in touch! If you need more info you can contact Andy Gesner at HIP Video Promo at (732)-613-1779 or email at info@HIPVideoPromo.com. You can also visit www.KESDistribution.com or www.Reverbnation.com/StreetCornerRenaissance to find out more about Street Corner Renaissance.