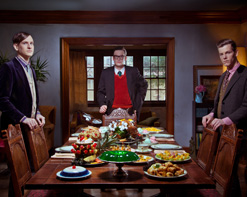 Hello programming friends! It’s Andy Gesner and the HIP Video Promo staff here with an alt-indie synth pop jab-to-your-jaw that will wake you up and get your hips-a-shakin’. The Portland quartet known as Starfucker (also spelled STRFKR to avoid offensive language) have put together a simple yet completely infectious keyboard chorus line that will bite and contaminate upon contact in their new single “Bury Us Alive.”

The members of Starfucker once said they chose this name for the band to just based on the curiosity of how far they could get “with a stupid name like that.” However, the band has generated some very serious buzz and have put out a record that is anything but silly, and is actually truly and gravely fantastic. Their third full length recordReptilian has received a great reception from SPIN, who gave the record a high score and state that “the Portland quartet’s third album is its best yet.” Even Pitchfork, who usually turn a cold shoulder to pop, admitted that Reptilians is indeed, “believe it or not, it’s actually a pretty good album.” STRFKR have also been featured on the popular UK website NME. The band has recently been supporting relief efforts in Japan as part of a Polyvinyl compilation that features label mates Deerhoof, Casiokids and Love Is All. The band is currently on tour across the US in support of Reptilians, playing club dates as well as making major festival appearances such as the Bumbershoot Festival and the Pygmalion Music Festival. The group already sold out 30 shows and counting in the US in support of Reptilians in 2011. In San Francisco, STRFKR performed in front of 15,000 jumping and screaming fans at Outside Lands a couple of weeks ago. A song from their debut album is also part of a heavily aired Target commericial recently as well.

“Bury Us Alive” reigns supreme with a driving keyboard line that will be your hum-along melody for days after hearing it in the same way that MGMT was. The vocals stay in the background as they trip the wire of synth layers, guitars and drums. This creates a dreamy effect that relieves the tension of the song, allowing the listener to drift away to the imaginedReptilians universe. The video is a trip into an imagined universe of inevitable eventual decay. The subjects of the clip, all painted in black are buried and mourned alive as part of a psychedelic spiritual ceremony. They then drift out of the physical realm and decay into pieces of earth. The video takes an interesting spiritual view on death and the afterlife, or lack there of. Despite the topic, the video is anything but murky and moody, instead filled with vivid colors and elaborate costumes to keep viewers glued to their mesmerizing screens!

We are incredibly excited to bring a clip that’s more than worthy of your attention, as it will sneak into your subconscious. The folks at Polyvinyl have done it again! We’ve got copies of Reptilians, and would love to set up some giveaways, so be sure to get in touch. Also don’t be shy about reaching out if you’d like to interview the band for your show. If you need more info, call Andy Gesner at 732-613-1779 or e-mail us at info@HIPVideoPromo.com. You can also visit www.PolyvinylRecords.com or www.MySpace.com/STRFKRmusic to find out more about Starfucker and any tour dates near you.