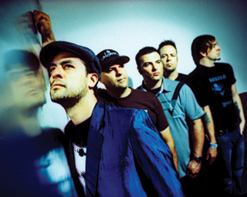 Greetings to my cherished indie rock family, it’s Andy Gesner and the staff at HIP Video Promo, and I’m pleased to be able to bring you the very latest from our friends at Fat Wreck Chords. Since the 2004 release of the punk landmark Exile In Oblivion, anticipation about Southern Cali quintet Strung Out’s next move has been building. Perhaps no band on the Fat Wreck roster has grown quite as dramatically as Strung Out has: while their playing and songwriting has always been outstanding, it has, in recent years, attained greater sophistication and impact as the band has incorporated different stylistic elements into their sound. They’ve also become more aware – the topical material is rich with informed observation, lived experience, righteous fury, and legitimate moral outrage. Strung Out is well-known among punk rock aficionados for their use of musical tropes most associated with classic prog-metal: fast guitar, finger-tapping, compositional complexity, rapid-fire kick-drum, aggressive performances from singer Jason Cruz. But they’ve also learned from their poppier labelmates how to coin a compelling melody, and they’ve absorbed some of the atonality and controlled chaos of their West Coast peers. It’s a hybrid that the group continues to develop and refine, and it’s proven popular enough to take them around the world several times – from Toyko to Western Europe, and back home to Simi Valley, California.

The secret to their flexibility and growth? It’s the band’s unceasing commitment to musicianship. Some of guitar player Rob Ramos’s scalding leads wouldn’t sound out of place on classic rock radio; others are wild, unrestrained squalls of notes and distortion. Drummer Jordan Burns strikes the bass drum and snare with the precision of a machine, the rage of a poorly-chained beast, and the power of a wrecking-ball. Cruz’s voice is a roar of adrenaline: harsh and bracing, but often empathetic, too, and surprisingly tuneful. “Calling”, the lead single from the upcoming Blackhawks Over Los Angeles, is a plea for recognition and genuine communication – and Cruz delivers it with the passion of an artist desperate to make a connection of consequence. Behind him, the band rages: punctuating his verses with drum-rolls and staccato kick-drum, and charging together through the anthemic chorus.

The clip for “Calling” opens on a disused urban street; there, a man in a riot helmet wheels a cart through an alleyway and up a flight of stairs. He’s transporting vintage monitors and computer drives – and as he sets it up on a desk, he struggles to make it work properly. Just then, the clip cuts to Strung Out in action: the band plays on a stage before a bank of floodlights, leaping and slashing with their instruments, and singing toward the camera. From his position in the tenement, the man behind the computers watches the band perform on a bank of television screens. Wires are everywhere; so are keyboards, electrical nodes, and an antique synthesizer. His frustrated attempts to coax a response out of his equipment appear to echo elements the band’s performance: Ramos taps on the fretboard of his guitar as the bearded orchestrator types frantically, and he punches against the tabletop just as Burns slams his snare. They’re all trying to connect as best they can, using the tools at their disposal, and raging at the static they encounter. Finally, he tosses all the technology aside and uncages a carrier pigeon. Lifting up a window decorated with a complex mathematical algorithm, he sets it free, showing the viewer an organic and personal solution to the problem of dehumanization.

We are surging with enthusiasm to be back in the saddle working with the team at Fat Wreck Chords, who are responsible for bringing you the ever-incredible Strike Anywhere, NOFX, Against Me! and many more! This hard-hitting punk rock outfit is poised to take Europe by storm with their overseas tour, and here in the states, Strung Out’s “Calling” is one video you do not want to miss. If you would like some copies of Blackhawks Over Los Angeles for on-air giveaways, let us know and we’ll make it done. If you need more info, call Andy Gesner at 732-613-1779 or e-mail us at info@HIPVideoPromo.com. You can also visit www.FatWreckChords.com or www.StrungOut.com to find out more about Strung Out.