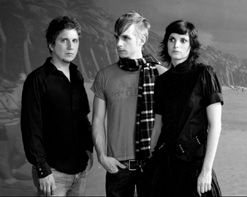 Big greetings from the Garden State! It’s Andy Gesner and the staff of HIP Video Promo bringing you a new video that is the perfect end of summer treat. Today’s clip opens on a pastel-shaded urban living room. The camera closes in on a beautiful woman sitting on a sofa, reading a book. While there’s something modern about the scene, there’s an archaic feel to it, too: many of the appliances in this apartment are retro, and the occupant’s dress, makeup and hairstyle evoke the early Sixties. It’s all quite serene – until the lights begin to flicker, the electrical outlets smoke, and the television starts to spit white noise. The hands on the clock on the wall spin frenetically; the antique hi-fi packs a static shock. Bewildered, she presses her ear to the floor: the camera pans down through roots, wires, and bedrock, and finds the Sunday Drivers, surrounded by gears, pulleys, and subterranean machinery, and rocking out in some infernal basement.

Is the Los Angeles trio responsible for this electrical disturbance? Certainly the Drivers are energetic enough to generate their own magnetic field. These radio-ready new-wave revivalists have spent the better part of 2007 tearing up local stages and building a reputation as one of the most promising indie rock acts in Southern California. Archetypes, the debut EP, has been home-recorded, but you’d never know it. Brady Erickson, Marisa Dupuis, and Bryan Zaebst have crafted a gigantic and enveloping sound here – the sort of sound the Killers might make when they grow up. The four songs on Archetypes cram in more musical ideas than the average indie rock band explore on entire full-lengths, and each is performed with consummate skill. “Endless Summer” is the best of them: a soaring melody wedded to a hypnotic groove, coolly discharged by the dangerously impassive Erickson.

The heat the Sunday Drivers generate is palpable – and in the clip for “Endless Summer”, it’s been made literal. The tighter they lock in – and by the first chorus, you’ll swear their instruments have been welded together – the hotter the subterranean light around them shines. By the end of the song, they’re practically drowned in hot yellow illumination; they’ve made this electricity themselves, and they don’t care how much it burns. The massive cogs, winches and levers that surround the band in their underground crawlspace function as a metaphor for the clockwork precision of their arrangements. (They’re really cool-looking, too.) It also helps that the three Sunday Drivers look as statuesque as they do: they’re human batteries, spitting out voltage from somewhere beyond appeal.

The young apartment dweller tries, anyway: she rummages in the drawer for a circular from the local power company, only to find that her vintage telephone has been overloaded with electricity, and is smoking on the hook. The visual algebra of the clip makes possible some clever juxtapositions; a sharp downstroke by Erickson is echoed by a shower of sparks from a shattered chandelier. The wild outpouring of illumination underground is matched by the girl’s vain attempt to use a flashlight to make sense of her chaotic surroundings. Near the end of the video, we spy on the Sunday Drivers from a diamond-shaped aperture. It’s only later that we realize that we’re seeing them through the hole in a giant gear – one turned by the furious force of the trio’s irresistible music.

We want to give a huge thanks to Cael Kirkland and the crew at Tsunami Entertainment for making us a part of the Sunday Drivers promotional team. They’ve been excellent enough to hook us up with plenty of copies of their incredible Archetypes EP for on air giveaways, so give us a holler if you’d like to get your hands on some!  If you need more info call Andy Gesner at 732-613-1779, or email info@HIPVideoPromo.com. You can also visit www.TsunamiEnt.com to find out more about Sunday Drivers.