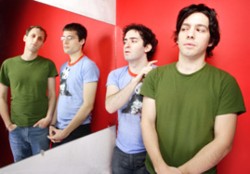 Hi, friends and fellow music lovers. It’s Andy Gesner and the staff from HIP Video Promo, back with another terrific new clip from a genre-defying indie band. Followers of Capital District will no doubt remember El Guapo – the gang of D.C. experimentalists who made music so unlike anything else on the legendary Dischord imprint. Refusing to be pigeonholed into one style, El Guapo applied their excellent musicianship to electro-pop, avant-garde hip-hop, tape and signal manipulations, and their own singular interpretation of worldbeat. After releasing two very different albums for Dischord – one off-the-wall, the other relatively song-based – the group has found a new home with Chicago-based Touch & Go Records, and rechristened themselves Supersystem (also the name of a pre-Dischord El Guapo LP).

Always Never Again is the first release for Touch & Go, and it’s a killer: big beats, singalong choruses, great instrument sounds, and impeccable performances by gifted players. No matter how far out El Guapo ever got, there was always a discernible pulse at the heart of their pieces, and their songs always made listeners move. Supersystem actually concentrates on making songs you can shake your booty to – and the result is explosive.

“Born Into The World”, the lead single, is an unambiguous invitation to the dance floor. But that’s not to call it unsophisticated: the beats are subtly complex, and the song is built around an indelible Middle Eastern-sounding guitar hook crafted by frontman Rafael Cohen. It’s this facility with foreign scales and harmonies that makes Supersystem a truly cosmopolitan act – one that bridges cultural boundaries with ease and draws connections between the indie underground and international dance music. Over a track reminiscent of the Electric Six or Chromeo at their funkiest, Cohen spins a surreal autobiography in a few tight epigrammatic lines. It’s rich in symbolism, allusive, and enigmatic – just like Supersystem’s music.

The video for “Born Into The World” is comparably mysterious. It’s divided into two roughly equal sections – a segment inside an urban apartment occupied by the band, and an animated excursion featuring mountains, skyscrapers, and manipulated images of the musicians. Strangely, the comparably prosaic interior shots feel more hallucinatory and drugged than the drawn images. They’re flooded with white light, and the frames are slowed down just enough so that Cohen’s lip-synching appears to be clouded, dreamlike. Drumming his fingers on his chest in time with the frantic beats, and staring, glassy-eyed, at the camera, Cohen exudes a sleepy-but-knowing charm.

When the clip switches midway to the animated sections, it’s sudden and surprising, like the shutters opening up on a third-floor bedroom. The drawn images look like cut-outs, and they slide up and down like the cardboard pieces in a pop-up book. Images of the bandmembers peek through the moving, two-dimensional objects – playing instruments, working mixers. Finally, the cardboard reverie over, the video returns to the band’s inner-city crash pad. The last thing we see is a spent Cohen falling flat on his back and into his bed.

We’re pleased to be on board with Sarah Tolbert and the rest of the team at Touch & Go Records to bring you this cool Supersystem video. We have a supply of Always Never Again CDs fore giveaways, and the band will be touring extensively. If you’d like to arrange a video interview or video ID when they pass through your area, just let us know. If you need more info call Andy Gesner at 732-613-1779, or email info@HIPVideoPromo.com. You can also visit www.tgrec.com or www.supersystemband.com to find out more about Supersystem.