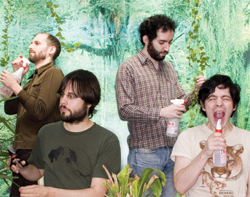 Greetings from the Garden State! It’s Andy Gesner and the staff from HIP Video Promo, back with another intoxicating video from a whip-smart indie band. They’re from the Capital District, but we’ve been seeing a lot of Supersystem in the New York metropolitan area lately: their autumn national tour kicks off at the Mercury Lounge on the Lower East Side, and ends up at Northsix in Williamsburg. The dance-rock quartet turned to Washington scene-vet Jonathan Kreinik to engineer their second album, true – but Kreinik has had lots of experience working with the hottest Gothamite bands (Ted Leo, Hot Snakes, !!!, many others). And how about the title of their lead single – “White Light/White Light”? Only someone who’d never cracked open a rock history book would fail to catch the reference to the Velvet Underground’s ode to intoxication on the streets of Manhattan.

So are Supersystem the latest band to successfully conjure the spirit of hipster New York City? Perhaps – but their D.C. roots also run deep. Drummer Joshua Blair also plays with Orthelm, Washington’s most unclassifiable and challenging indie rock band. Moreover, the quartet has its origin in El Guapo, a respected component of the Dischord label. El Guapo had many of the hallmarks of the famous Dischord sound – attitude, abrasiveness, and a willingness to take chances – but the combo was also playful, adventurous, and rhythmically sophisticated. As a mark of continuity, Supersystem took its handle from the name of the first El Guapo album. A Million Microphones and its heralded predecessor might swing harder than The Rapture and groove as ferociously as LCD Soundsystem, but beneath the party-ready chic is a core of fierce post-punk energy not far removed from the Dismemberment Plan or even Fugazi. Supersystem sounds to us like the perfect fusion of New York art-pop style and muscular D.C. punk.

“White Light/White Light” is a perfect, insouciant example of what makes Supersystem so impossible to ignore. It’s an electropop number – synths buzz and whir around its periphery – but the rhythm section hits so hard, and lead singer Rafael Cohen sneers the lyrics so deliciously, that there’s nothing even slightly fey about it. The melody is of the sort that’ll nag at your head for weeks after hearing it, and the chorus is a riddle that arches toward transcendence. Somewhere, Lou Reed is surely proud.

Opening with a shot of the Metropolitan Avenue subway stop, Ben Dickinson’s clip for “White Light/White Light” is both an unapologetic love letter to Brooklyn and a sophisticated departure from the conventions of most modern NYC videos. Dickinson’s Waverly Films knows its way around the borough – the production team has shot clips for Brendan Benson, The Spinto Band, VHS or Beta, and many other locals. He knows the streets and bars that are going to look good through his lens, and he provides the band with a hedonist backdrop for its performance filled with cab rides, drinking, trains, and flight through the city.

Yet at the same time there’s something detached and diagnostic about the “White Light/White Light” clip. Many of the objects in the video – including several of the musical instruments – have been digitally replaced by two-dimensional blue line drawings. Calling attention to the geometric shapes of drums, synths, and bar glasses, Dickinson’s clip suggests that Supersystem has a deeper understanding of the components of its music and its milieu. The “White Light/White Light” video proves, once again, that they can be intellectually rigorous and wildly celebratory at the same time. Not that any fans of the band really needed a reminder!

Touch and Go has brought us two of our favorite clips of the year with Calexico and The Black Heart Procession, and we’re delighted to be working with Sara Tolbert and all of the good folks at the label once again. Supersystem will be on tour for all of September and October, so if you’d like to set up and on-air interview or giveaway of their new CD A Million Microphones, don’t hesitate to be in touch. If you need more info, call Andy Gesner at 732-613-1779 or e-mail us at info@HIPVideoPromo.com. You can also visit www.TGRec.com  or www.SuperSystemBand.com to find out more about Supersystem.

For info about Supersystem’s previous video, “Born Into The World” click HERE