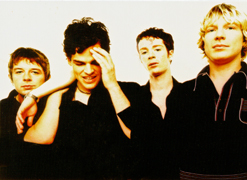 Hey, everybody, it’s Andy Gesner and the tireless staff from HIP Video Promo, here to spread the word about the welcome return of a Seattle group with a colorful history – and a sound to match. Anybody who has ever played in a band knows all about the character of the typical practice space: the low light, the instruments stashed in the corner, the posters hung crooked on the wall, the dry-erase board with the setlist scrawled on it in rough magic marker, the tight quarters with other sweaty musicians. Sweet Water has certainly been there – they’ve been pivotal figures in the Seattle music scene since the early days of Sub Pop records. They shared billing with an early version of Pearl Jam at their first show; they’ve toured with Alice In Chains and Stone Temple Pilots; their 1995 album Superfriends is considered a classic of Northwestern rock. For their latest clip, Casey P. Chinn – himself a veteran of Seattle’s storied music scene – takes us inside the Sweet Water practice space. There, he captures the band in action; no frills, no tricks, just total commitment to the rock.

Clear The Tarmac is Sweet Water’s first album in close to a decade, but don’t call it a comeback or a reinvention. Because of the local popularity of the band’s back catalog, Sweet Water’s music never truly fell out of circulation – and when the band returned to the stage, audiences were as enthusiastic as ever. And time off hasn’t dulled their edges one bit: the band’s latest recordings are the leanest, hungriest, and most immediate yet. Clear The Tarmac feels elemental and inevitable; it also contains Sweet Water’s catchiest melodies yet. The band considers it the best record they’ve ever waxed – even better than the heralded Superfriends – and the critics agree. “Clear The Tarmac reverberates with promise”, writes Racket Magazine, “and the band seems poised to take their rightful place on the mantle of rock icons.”

“Rock Steady” epitomizes the new approach: a bullet-proof hook, a catchy chorus, slashing six-string riffs, and a propulsive backbeat. It’s economically-written and energetically-played, reminiscent of the best moments on Sweet Water’s 1990s albums, but unapologetically forward-looking. Casey P. Chinn – respected rock photographer and director of the cult indie hit The Red Boot Diaries – takes a similarly fundamental approach in his clip for “Rock Steady”. By shooting the video in the close confines of the band’s practice space, he’s able to demonstrate the band’s easy camaraderie: everybody listens carefully and watches each other, they pick up on cues, they’re subtly playful, they’re clearly thrilled to be getting back to the rock. The clip also reinforces everything we already know about Sweet Water – they’re all about the music, and even if there isn’t any audience in front of them, they’ll still play with passion, conviction, good humor, and rare fire.

We’re very excited to be working with the Sweet Water crew to bring you this bombastic new clip. They’ve hooked us up with plenty of copies of Clear The Tarmac for you on-air giveaway needs, so drop us a line to get your hands on them! If you need more info, call Andy Gesner at 732-613-1779 or e-mail us at info@HIPVideoPromo.com. You can also visit www.SweetWaterRocks.com to find out more about Sweet Water.