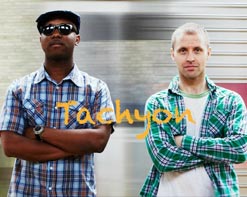 Tachyon co-leaders Jonathan Arons and James Cage have more than earned their stripes in the industry. As well respected horn players and members of the world famous Chops Horns Section, the two have backed up and arranged music for music titans such as Alicia Keys, Stevie Wonder and Jon Bon Jovi. On top of that, both Arons and Cage have found musical success individually. Arons, who can be heard on Dave Holland’s Big Jazz Band’s Grammy Winning album, Overtime, also found himself in the limelight after making a number of highly memorable appearances on massively popular hit TV shows like, America’s Got Talent, Jimmy Fallon, and Steve Harvey’s Big Time, as the internet sensation “the dancing trombone player.”

Cage, a top tier trumpet player who graduated from Julliard, has cultivated his production, engineering, and mixing skills over the years, securing licensing for a number of his songs and holding down mixing duties for respected artists such as British singer/songwriter Estelle and Philadelphia’s Vivian Green. After many successful years of backing up other artists, Arons and Cage decided it was time to team up and take their musical abilities to the front and center. Believing Arons had the vocal chops to front the group, the two decided they wanted to showcase his singing by writing music that told stories of tumultuous relationships and spirituality, something we can all relate with. Two years later and countless hours clocked working together in Cage’s home studio, Tachyon was born, ready to take the world by storm.

The Chauncey Xavier-directed video for “Circles” is dazzling from start to finish. The clip showcases a feel-good Arons as he brings the positive, sexy vibes as he shakes his booty along with an incredibly beautiful young lady. In his mesmerizing voice he sings lines like, “You’ve got me goin’ in circles. I cannot deny. High as a kite in the sky!” & “Destiny has brought you. Fate has no other plan. Forget all they’ve taught you. Your soul will guide your hand. Take me to the top. We will never stop.” It’s hard to deny the appeal of such a wonderful track; in fact, give the song 30 seconds and you’re pretty much guaranteed to get pulled straight into Tachyon’s ear-pleasing, funkified world. With an addicting beat that you can’t help but move to, full-on sizzling production, and the perfect blend of auto-tuned vocal hooks, this song is the full dance song package.

Funk, disco, dance/pop… it’s all here and it’s simply too good to resist. For more information on this exciting new electronic duo,, please contact Andy Gesner and the HIP Video Promo staff at (732)-613-1779 or email us at info@HIPVideoPromo.com . You can also visit www.TachyonBand.com for more info.