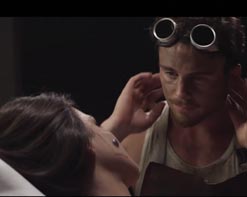 The music of emerging artist Temporary Hero is at once contemporary and experimental. With an array of sounds capturing unique elements of indie-rock, alternative, dub-step, and electronic genres, this artist creates undefined techniques. HIP Video Promo is pleased to introduce the interesting clip and story of “I Want 2 Fall In Luv With A Human.”

Described as an “inter-galaxy lovechild of Thom Yorke, Madonna, and Yoko Ono,” Temporary Hero makes contemporary music that will wow the masses. Taking the modern music scene by storm, the key to this artist’s music is no boundaries. Anticodon Records invites music fans of every genre to join this forward thinking phenomenon called Temporary Hero.

With disco infused tunes, Temporary Hero’s music echoes sounds of all ages. For instance, a recent video clip for the single “Glitterball” has been said to capture echoes of artists such as Prince and Chic, while other songs are reminiscent of the sound waves from the 2000s. In the following video clip, we are transported to another dimension with the otherworldly visuals of “I Want 2 Fall In Luv With A Human.”

Temporary Hero continues to explore the relationship between emotion and technology, mixing his hypnotic song with otherworldly visual techniques. Directed by Anthony Pietromonaco, the stars Andre Bolourchi, Medalion Rahimi, and Duane Daniels steal the scenes in this captivating video clip about the story of attraction between a human and a robot. The video is so powerful that it also inspired the short film called 528 by Manifest Film, re-interpreting the human-love connection from a different angle. The video is also so striking that the footage was edited to create the official video for the Chus & Ceballos remix of the song. Hold onto your seats, this is a wild ride.

As if you couldn’t take your eyes off of the screen in this suspenseful clip, you won’t be able to get enough of Temporary Hero’s fantastic music! Be sure to contact Andy Gesner and the HIP Video Promo staff at (732)-613-1779 or email us at info@HIPVideoPromo.com . You can also visit www.AnticodonRecords.com/Temporary-Hero/ for more info.