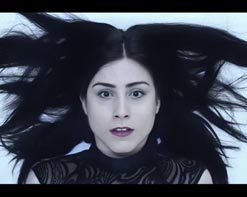 Joseph Vitterito, the mastermind behind Temporary Hero (as well as the Anticodon label), is a man who tirelessly explores the relationship between emotion and technology. Described as an “inter-galaxy lovechild of Thom Yorke, Madonna, and Yoko Ono,” Temporary Hero makes contemporary music that will wow the masses. With an array of sounds capturing unique elements of indie-rock, alternative, dub-step, and electronic genres, this artist creates undefined techniques. Today we’re pleased to share with you the brand new offering, “Circus,” which is sure to leave viewers enchanted and clamoring for more.

The previous video for “I Want 2 Fall In Luv With A Human” was a mind bending clip that explored the twisted idea of attraction between humans and robots. It was a cinematic treasure that also explored a deeper mindset about the rise of technology. For the new clip, “Circus,” Temporary Hero has crafted a visual that plays on the stark contrast of dark and light, white and black, and emotional highs and lows.

Much like Temporary Hero explores the extremes of inspiration and execution, the video focuses on a mesmerizing female dancer as she performs a singular dance routine. Yet, although the routine never deviates, she finds herself in a variety of locations, some as menacing as an abandoned hospital, and some as sterile ad an all white room with nothing but a simple table by her side. It’s a transfixing example of dedication and devotion, regardless of the environment we are in, no matter how much of “circus” the outside world might be at time.

Be sure to contact Andy Gesner and the HIP Video Promo staff at (732)-613-1779 or email us at info@HIPVideoPromo.com.